Activists were making the case for a legal no-cuts budget. They referred to Stoke's Tory-Independent council, which is using reserves to delay cuts. Unrelated to this, one of Stoke's independent councillors is apparently a former BNP member. 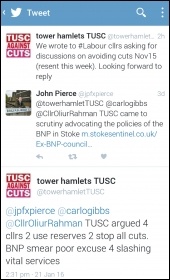 I am disappointed Cllr Pierce attempted to smear TUSC as "advocating the policies of the BNP".

To say this is supporting BNP policies is ignorant in the extreme. BNP councillors have voted for cuts time after time. One BNP councillor in Kirklees boasted: "You get rid of 25% of council staff and no-one would notice."