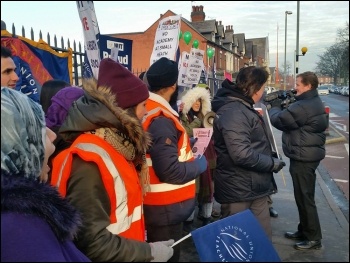 Teaching staff in the NUT at Small Heath School in Birmingham have started nine days of strike action (19-21 and 26-28 January and 2-4 February) against the threat to turn it into an academy.

The school have failed to properly engage with staff, pupils or parents. Teachers have already taken five days of strike action before Christmas over this issue.

Two days after teachers voted for this round of strike action NUT rep Simon O'Hara was suspended by management in an obvious attempt to break the action.

About 50 teachers and supporters attended the first picket on 19 January on a freezing cold morning and heard many passing cars toot their horns in support.

The mood was lively and determined and the picket line was visited by NUT NEC and Socialist Party member Jane Nellist.

There was another well attended picket on 21 January when NASUWT members were out on strike too. Once again many cars tooted their horns in support.

Management are still refusing to talk to the unions, It may well be that they are trying to drag the dispute out and hope that the majority of parents will eventually oppose the strike.

It is possible that management want this to be a watershed dispute in the struggle against academisation.

But there is at the moment a vocal group of parents in support of the strike and IT staff who are members of the teachers' and lecturers' union ATL will be striking on the next dates.

The teachers are determined to win what could be a bitter dispute.