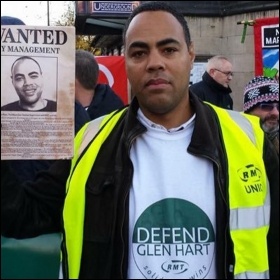 Tube workers are being balloted in defence of victimised RMT rep Glen Hart. The National Executive Committee considers that there is strong support for Glen from members across all London Underground grades and have taken the decision to conduct a ballot for strike action and action short of a strike. A dispute exists over the continued suspension and threat of disciplinary action, up to and including dismissal, against Glen. This will remain in place until Glen Hart is reinstated to his full substantive role. The ballot papers were posted out to all London Underground members on 21 January and the closing date is 4 February.

Brighton Hove and District Trade Union Council has called a demonstration for 30 January against the Labour-run city council's unprecedented cuts to public services.

The protest will start at 12pm at The Level, before marching to the town hall. Trade unions and local campaigners are demonstrating in the face of £68 million of cuts, and the huge impact this will have across the city.

The NSSN is hosting a public solidarity meeting in Port Talbot on Wednesday 10 February to build support for the steelworkers facing job losses (see last week's issue of the Socialist).

It is at 7.30pm in the lounge at the Grand Hotel Station Road, Port Talbot, SA13 1DE (opposite the train station).

It is open to everyone and speakers include Rob Williams, NSSN national chair and former Swansea Visteon (Ford) union convenor.