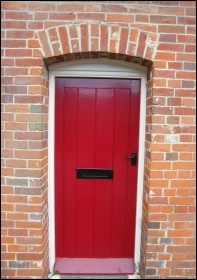 Refugees and asylum seekers in Middlesbrough, Teesside, have been experiencing daily abuse and attack. Their homes were marked out with red-painted doors by property developer Jomast.

Meanwhile in Cardiff, private firm Clearsprings Ready Homes has been marking the asylum seekers it houses with compulsory red wristbands.

Local campaigners first raised the matter four years ago with G4S, asking it to change the doors; the firm refused. Then they raised it with Parliament's Home Affairs Committee. Now, with increasing violence, the Home Office has ordered an urgent review.

Refugees report that they feel vulnerable and unsafe. One said: "This red door affects our life.

"When we open it, we have to watch our back in case we meet someone trying to do something. We have had eggs thrown at the door, they bang on the windows and we get abuse."

The Times reported that asylum seekers at one house felt so stigmatised that they painted their door white. Jomast repainted it red after an inspector visited and said it was "against company policy".

Jomast's "company policy" is reminiscent of marking the doors of Jews with the Star of David in 1930s Germany. It must end now. The council must provide safe, decent accommodation for refugees.

Clearsprings has now promised to stop its wristbands policy after public outrage. It also appears that Jomast has finally conceded under the glare of national publicity, and is repainting the doors.

The Tory government has cynically placed refugees in some of the country's poorest areas, which already have too few resources. The Socialist Party campaigns for investment in affordable homes for all, and the right to stay for migrants.

We fight against racism and stand in solidarity with refugees and all workers. Reverse all cuts and kick out the warmonger politicians!