From The Socialist newspaper, 17 February 2016

Rally to defend jobs in Northern Ireland: "We won't sit on the sidelines and watch as Ballymena is left an economic wasteland" 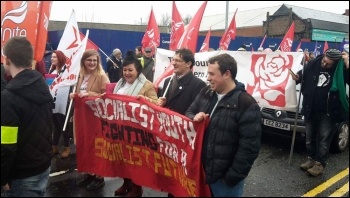 On 8 February, 800 people gathered in Ballymena, Northern Ireland, in opposition to the threatened destruction of manufacturing jobs in the area. The JTI Gallaher cigarette factory and the Michelin tyre plant - the largest employers in the town - are to close with the loss of almost 2,000 jobs, which would have a devastating impact on the local community.

The rally - the first of its kind in the town since 1982 - was called by Unite the Union to try to secure a future for Ballymena and its young people.

"I'm proud to be a unionised worker," said John Allen, Unite convenor in the Michelin factory and Chair of the local area activist committee. "A worker is far from powerless. When we stand together, we are unstoppable. Today shows that when we stand together, there is nothing we cannot achieve. We won't be just the object of investment decisions. We won't sit on the sidelines and watch as Ballymena is left an economic wasteland."

Socialist Youth member Emma Montgomery - a 19-year-old from the town whose mother used to work at JTI Gallaher - spoke of the bleak future already facing young people in the area thanks to Tory and Stormont cuts. Many have to travel long distances to college and the jobs on offer are overwhelmingly low paid and precarious.

The national and regional leadership of Unite were represented on the platform. Irish regional secretary Jimmy Kelly told the crowd: "We're not here to demand crumbs off the top table. This is to demand a better future, a future for our class, across all communities."

Unite the Union - particularly its local activists - are to be congratulated on this excellent initiative. It is vital that working class communities do not simply lie down and accept the loss of manufacturing jobs.

Councils have a choice: no cuts to jobs or services

An open letter to John McDonnell from Tony Mulhearn

Hands off the Butterfields estate!

"You can cut the cake but not our libraries!"