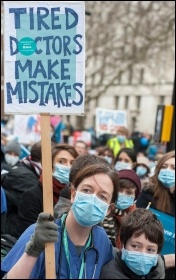 Junior doctors march against attacks on NHS and their contracts, photo by Paul Mattsson   (Click to enlarge)

Health minister Jeremy Hunt has declared war on junior doctors by imposing a contract which will remove safeguards to them working more unsocial hours, and for less pay.

It's a contract that the public knows will put patients' safety at risk. It's a hard pill to swallow when there are massive shortages of doctors and nurses across the National Health Service (NHS). How does Hunt intend to fill these vacancies when junior doctors have been made to feel undervalued and demoralised by the stance he has taken, and when student grants for nurses have been axed?

Doctors didn't pick this fight but make no mistake, they are determined to win it. Left with no other option the BMA doctors' union has announced an escalation of action to three 48-hour strikes in March and April.

Does Hunt think that junior doctors who are used to working upwards of 70 hours a week won't have the stamina to keep up this action?

No junior doctor disagrees with the call to improve cover in the NHS over the whole of the week. To do this requires more staff and extra funding. But this is not what the government proposes.

It's clear that this dispute is over so much more than pay and hours. Junior doctors know the NHS is under threat. This contract is part of the Tories' plan to destabilise the NHS, run it down, claim it is failing, and then pass it over to the eagerly waiting hands of the private sector.

Junior Doctors know what's at stake. It is essential for all health workers and all of us who use the NHS to support them in their fight. Other health unions need to show the determination of their BMA colleagues and come together to organise coordinated action to save the NHS.

A national demonstration in March should be called as an emergency to galvanise support behind health workers and build for an intensive campaign to defeat the government.