Link to this page: https://www.socialistparty.org.uk/articles/22337 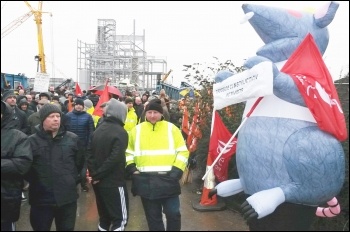 "Pay the rate, Pay the rate!" chanted 200 engineering construction workers protesting outside the new biomass power station being erected in Rotherham, South Yorkshire. The blockade by GMB, Unite and Ucatt trade union members stopped work on the site for the day.

The rate under the national industry agreement should be £16-64 an hour. But the largely migrant workforce are being paid just 9 euros an hour (about £7). With around half the protesters unemployed at the current time, it's no wonder they are angry at the exploitation of migrant labour at the expense of local employment.

"This is just the start" said union officials, reporting that similar protests were taking place on the same day, 1st March, in Wales and Scotland. The engineering construction unions National Shop Stewards Forum meets on 15-16 March and should call more coordinated protests and a national one day strike.

How can the bosses get away with this "rat-race to the bottom"? Here's the story behind the Rotherham project.

The local Labour council gave planning consent in 2011 but made no provision for adherence to collective agreements or local employment. The venture capitalists who had bought the site then sold it on at a big profit to a Danish company, CI.

CI then contracted Babcock & Wilcox Volund (BWV) and Interserve to design, construct and then operate the plant. BWV refused the trade unions' demand that the project be included under the terms of the 'Blue Book' NAECI national agreement, and then sub-contracted the construction of the boiler to a Croatian firm called Duro Dakovic TEP.

Are you still following this? It gets worse!

Duro Dakovic TEP is the same company that the unions caught underpaying its migrant workers last year on the Ferrybridge Multifuel power station in Yorkshire.
Because that job came under the NAECI, the unions were able to force the company to repay every euro it owed its workers, only to find out from a worker via email that when they got back to Croatia the money was retaken from their wages under duress!

Because the Rotherham biomass project and similar new waste-to-energy plants are not covered by the Blue Book, then the bosses can pay 'below the rate' and legally get away with it. In fact the European Union Posted Workers Directive only gives workers 'posted' to work temporarily in another EU country the protection of the host country's minimum standards, ie the minimum wage, not the industry rate.

So much for the TUC claims that the EU protects workers. No wonder nearly every construction worker wants out of the bosses' EU.

Whilst one or two home made placards on the demo called for "British Jobs..." the overwhelming attitude was to stop the exploitation of migrant workers by trying to get them to join a union, and for a united fight against the bosses who are undermining the hard-won terms and conditions of the national agreement.

Many of the protesters had been involved in the 2009 Lindsey Oil Refinery strikes and walk-outs, the last time the industry's workers stood up across the country, and recognised that would have to be repeated to win again.