Link to this page: https://www.socialistparty.org.uk/articles/22425 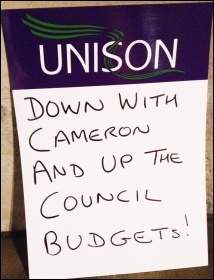 Six years of Tory driven austerity have been years of pain and suffering for the many, so few will have expected much from the government in Wednesday's budget to benefit them.

But more and more are asking: When is this pain going to end? This budget comes nine years after the Great Crash of 2007-08. When will 'good times' return?

Imposing budget cuts to pay off the deficit, to bring about economic recovery, is a Tory mantra that many have been hoping would bring a return to growth. But austerity hasn't revived the economy, paid off the deficit or reduced government borrowing. Now the Tory chancellor, George Osborne, far from crowing about the success of his management of capitalism, is warning of lower growth and a new economic recession.

Many people will be seething at the prospect of more cuts and another recession, and asking: What needs to be done to avert further pain? 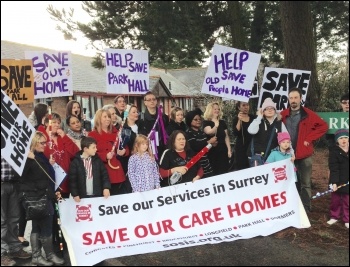 Campaigning to save care homes in Surrey   (Click to enlarge)

The Tories' policy, representing the interests of big business and the capitalist system, is to make the working class pay for the economic crisis, through cuts to jobs, pay, pensions and benefits, as well as to the 'social wage' - via cuts and privatisation to public services, particularly the NHS and council services.

That is what's behind the forced academisation of remaining state secondary and primary schools by 2022, removing national pay agreements, driving down wages and preparing for further privatisation that will see children's needs forgotten in the race for profits.

From the many to the few

Austerity has been a policy of wealth transfer from the many to the few. The cuts have been used to pay for a huge reduction in corporation tax, further enriching the 1%. Tory claims of assisting working people by increasing the starting tax threshold and slightly raising the minimum wage for over 25s, go no way to removing the poverty afflicting over 25% of children or restoring wages frozen for so many for the last six years.

A sign of the shifting tax base onto the shoulders of working and middle class people can be seen in the fact that government revenue from corporation tax is now just £43 billion - and set to fall further as its rate is cut to 17% - while VAT now raises £138 billion.

Many local councils will raise council tax further while implementing another round of vicious cuts, further squeezing hard-hit pockets.

The Tories argue that such policies will revive the economy by creating the conditions for investment, by increasing the profitability of businesses. Profits have certainly risen on the backs of low-paid workers and zero-hours contracts, but the economy has stagnated as investment has fallen.

Austerity policies have worsened the economy - squeezing the army of consumers, the working class and middle class, who remain saddled with enormous personal debts, 142% of incomes. With the majority having little to spend, industry is reluctant to invest in production, as its bosses doubt their goods will sell and realize a profit.

The battle lines had already been drawn before this budget with the junior doctors leading the fight to defend the NHS, now joined by NUT college teachers, port workers at Grangemouth, Glasgow City Council janitors - all forced to strike back against the impact of austerity. Many more will be forced to follow their lead. 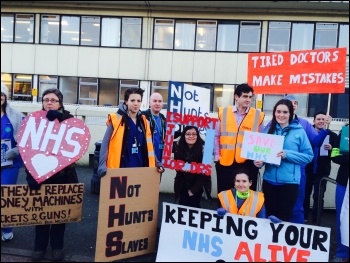 The only way to reverse the budget cuts and restore wages, benefits and pensions is for the trade unions to mobilise the huge mass of anger in coordinated action to confront the government.

Teaching unions must be to the fore in mobilising their members, parents and students to block the destruction of state education.

Every trade union member must demand that their union calls on the TUC to mobilise the anger on the streets in a national demonstration against austerity, as a means to prepare for coordinated strike action and a 24-hour general strike.

The Tories are weak and divided over the European Union referendum and on other issues, and would be forced to retreat in the face of such determined opposition.

The demand from local government workers in the unions Unite and Unison for Labour-led councils to refuse to carry out further cuts needs to be vigorously campaigned for in the shape of national action.

At the ballot box in May, where right-wing Labour councillors have voted through Tory cuts, anti-cuts candidates for the Trade Unionist and Socialist Coalition (TUSC) will back this demand. 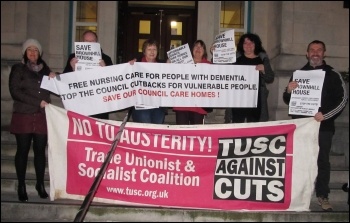 TUSC campaigning against cuts in Southampton   (Click to enlarge)

Britain remains a rich country, the wealth exists to meet the needs of society, but it requires bold socialist policies to realise that goal.

Labour shadow ministers Jeremy Corbyn and John McDonnell are right to criticise the failed economic policies of austerity and the unequal impact it has meant for millions of workers, their families and those on benefits and state pensions, while the super-rich 1% got richer.

Last week John McDonnell launched Labour's new Fiscal Credibility Rule, which: "will eliminate the deficit and pay down the debt without accepting Tory cuts to our public services. In the words of our Economic Advisory Council member Joseph Stiglitz, we must now 'rewrite the rules' of how our economy operates."

However, far from rewriting the rules, this restricts a Labour government to working within the rules of the capitalist market, a market that faces a renewed world crisis. The capitalists once more will demand that we bail them out of the crisis and pay for it in further cuts. We have seen this borne out vividly in Greece.

The only way to end this crisis-ridden economic system is to break from it by building political representation for working class people with the aim of carrying out socialist policies - including to cancel the debts incurred by the bank bailouts, take privatised utilities back into public ownership, and nationalise the banks and major monopolies under workers' democratic control and management.

Only on that basis would it be possible to implement a plan of production that could bring investment to create full employment, restore and improve wage levels, benefits and pensions, and eliminate poverty.

A programme of public works could end the housing crisis, rebuild crumbling schools, hospitals and care homes for the elderly, and develop a sustainable public transport system.

It is socialist ideas that must lead this fightback, so that we can permanently eradicate poverty, inequality and capitalist economic crisis.

This version of this article was first posted on the Socialist Party website on 17 March 2016 and may vary slightly from the version subsequently printed in The Socialist.