Link to this page: https://www.socialistparty.org.uk/articles/22510

Editorial of the Socialist, issue 896 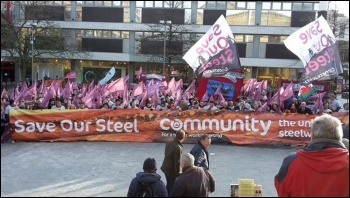 In 2012, a 'Ghost Parade' took place in Ebbw Vale to commemorate a decade since the steelworks had been closed by the then owner Corus. It was an artistic protest at the loss of the plant in what has quickly become a deprived part of the South Wales valleys. Should the remainder of the UK steel industry suffer the same fate over the next few months, there will be a whole list of ghost towns littering places like South and North Wales and Yorkshire.

The jobs of 15,000 steelworkers directly employed by Tata are on the line. But when all those who depend on the plants are included - such as contractors and freight workers on road, rail and sea - three times as many workers could be facing the dole.
This is a national emergency that needs emergency measures.

Even if a buyer is found it will be to asset strip and destroy the steel industry. This cannot be allowed. Action needs to be taken now. Increasing numbers of workers are asking: If the banks could be bailed out - why not steelworkers? The demand for immediate, permanent nationalisation of the industry is rapidly gaining support. The urgent question is how nationalisation can be achieved.

Members of the Socialist Party and supporters of the National Shop Stewards Network should be proud of the role that they have played in popularising the idea of renationalising Tata's UK operations to save the plants and jobs. Until now the N-word has been an unspoken but popular demand. It is now increasingly seen as being needed urgently. This has definitely levered pressure on the Labour and trade union leaders to take up this demand more boldly. 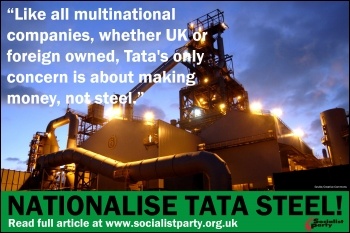 As the days have gone on, Jeremy Corbyn and shadow minster Angela Eagle have been pushed into calling for intervention, even stretching to some form of nationalisation. Unite and the GMB have now explicitly called for it as well. Even Community, faced with Tory business minister Sajid Javid's ruling out of nationalisation, has called for it.

But there has to be a clear call for this step as the platform to build mass action to force the government to act.

As was shown by the incredible social explosion caused by Major's Tory government announcement of the closure of the last remaining collieries in 1992, an event takes on a significance far wider than a particular industry. Then, the full state conspiracy of Thatcher's attack on the NUM in the strike of 1984-85 and the resulting destruction of the mining communities was laid bare. In the space of a couple of months, a huge mass movement developed that totally shocked the Tories. It could have defeated them if the TUC and NUM President Arthur Scargill had used the platform of the massive demonstrations (two in London of ¼ million in the space of five days) to call for a 24-hour general strike.

Two decades earlier, the threatened closure of Upper Clydeside Shipbuilders would have posed the end of shipbuilding in Glasgow. It detonated a mass struggle of a 'work-in', a huge demonstration and effectively a regional half-day general strike of 100,000 workers. The Tory government of Heath was forced to come up with a rescue plan.

In 1971 the Tory government was forced to step in and nationalise Rolls Royce at 24 hours notice.

Similarly now, there is a recognition that a fundamental part of the national economy could be lost, and that part of the country's heritage is disappearing. Cameron is even out of step with parts of the establishment on this. They fear a loss of prestige. The former First Sea Lord and Chief of the Naval Staff complained that all United Nations Security Council countries had major steel plants to support their defence industries.

Even the Daily Mail has asked: "...after Labour bailed out the bankers, are the Tories to be remembered as the party that let our steel industry die?"

This can quickly become a symbol for the reality faced by workers - they can no longer get well paid, permanent jobs that allow them a decent place to live. Instead they face low paid, zero-hour contract work. If Corbyn and the union leaders called a national demonstration demanding nationalisation, it would have huge potential to put the Tories under pressure. Particularly as junior doctors are striking and teachers are balloting for action against forced academisation.

But if the Tories maintain their refusal to nationalise, workers will have to consider occupying the steel plants to 'up the ante'.

A one-day national protest walkout by Tata UK steelworkers would send a huge signal to Cameron that workers will not let the plants shut. 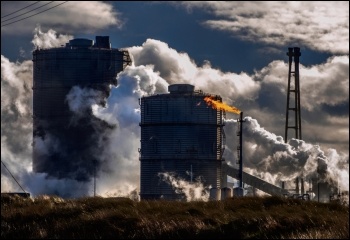 It has been estimated that Tata's UK steel business is losing up to £1 million a day. This is being used by Cameron to rule out nationalisation and can create the feeling that it is a basket case. But in reality, this is a drop in the ocean for the government, especially when the social costs of closures and mass redundancies are factored in. In just one year the cost of Osborne's recent cut to capital gains tax for the richest 0.3% will be double the annual losses of Tata Steel UK!

And it is nothing compared to the billions stolen from steelworkers' pension funds when British steel was privatised. We demand this money is returned.

The idea of nationalisation, if raised in the context of socialist public ownership and economic planning, could totally transform the situation. We call for Tata's books to be opened and inspected by the unions and the workforce. The redundancies that have already been announced should be stopped. The steel distribution network should also be nationalised and every publicly-financed construction scheme in the UK such as Crossrail, HS2, and power projects, should be supplied with steel from the nationalised steel company.

This would also pose the renationalisation of the railways, which is massively popular and would be another market for publicly-owned steel. Taking the energy companies back into public ownership would deal with the issue about energy prices! There should be no compensation for Tata's bosses or any fat cat investors.

Such a demand and strategy would also be the banner of a mass struggle of steelworkers, their communities and the wider trade union and working-class movement to inflict a political defeat on the divided Tories.

This version of this article was first posted on the Socialist Party website on 31 March 2016 and may vary slightly from the version subsequently printed in The Socialist.