From The Socialist newspaper, 6 April 2016 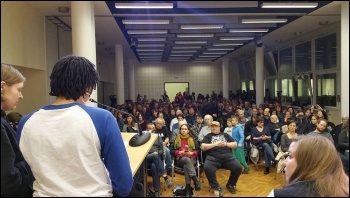 Against a background of growing polarisation and unease in Germany 420 people from eleven countries were in Berlin for Sozialistische Alternative's (SAV - sister section of the Socialist Party in Germany) 'congress against war, racism and capitalism'. New young members in particular put their stamp on the three rallies, 30 workshops and more. A special collection raised €2,000 for Xekinima (CWI Greece) and Socyalist Alternatif (CWI Turkey). 100 year-old Theodor Bergmann, who has been fighting against fascism, Stalinism and capitalism for almost 90 years, received a standing ovation. Frankfurt taxi driver Alexander said, "Wow! Full of energy and ideas."

Eleven members of Linkse Socialistische Partij/Parti Socialiste de Lutte (CWI in Belgium) were arrested on 2 April. The previous weekend 400 hooligans led by far-right fascists were escorted by police to disrupt mourners of the Brussells terrorist attacks. This time hundreds of anti-racists turned out to guarantee the far right were opposed, but the police arrested dozens of anti-fascists, including members of LSP/PSL. See 'Scandal in Brussels' at www.socialistworld.net

Panama Papers: they're all in it together!

Getting the anti-austerity struggle onto the ballot paper

Workers and campaigners fight to save library