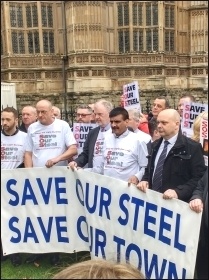 Save our Steel lobby of parliament, photo Scott Jones   (Click to enlarge)

Sir Nick Macpherson warned the state could make a loss on its £19 billion stake in the part-nationalised Royal Bank of Scotland when it sells it off.

The Socialist sees this as an argument not to sell, but rather take the bank's profits into public hands as well. Macpherson sees it as an argument against nationalising Tata to save 15,000 jobs.

The Financial Times calls him the "high priest of austerity". It's easy for the pro-EU Eton and Oxford graduate to preach pain for workers. His own secure tenure was worth a minimum of £185,000 a year.

Meanwhile, climate consultancy CE Delft reports that Tata has taken over £700 million in European Union carbon subsidies. It was the top UK recipient of handouts under the 'emissions trading scheme'.

The EU is happy to throw money at private owners to boost profits in lieu of action on climate change. But when the bosses threaten job cuts and asset stripping, EU rules oppose nationalisation.

The Socialist says: open the books! What happened to that £700 million? Defy the EU's anti-worker rules: nationalise Tata. Vote Leave to break up the EU's free-market treaties and institutions.