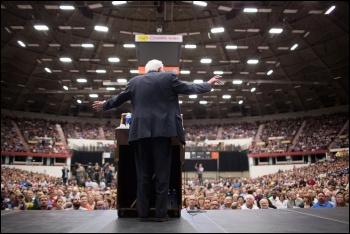 Kshama Sawant, Socialist Alternative (co-thinkers of the Socialist Party in the USA), Seattle

Despite a decisive victory, providing further confirmation of her likely nomination, in many respects Hillary Clinton emerges from the New York primary more damaged, her party more divided, than she entered it.

The 'Battle of New York' has served only to further expose what millions of people in the US are becoming painfully aware of - the Democratic Party primary is rigged in favour of the establishment.

The discussion started with the top-down, super-delegate system and enormous influence of corporate money in politics. It has gone on to raise awareness about the generally undemocratic nature of the Democratic primary and party itself.

This includes its myriad of anti-democratic voting rules, frontloading of conservative states, heavy tilting of the playing field by the media establishment, and antagonistic role of Democratic Party leaders towards grassroots challengers like Sanders.

Working people have seen the pro-corporate character of the Democratic Party leadership itself on full display. To this establishment, Sanders' call for a 'political revolution' against billionaires and wealthy campaign donors is utterly unacceptable.

This Democratic leadership bases itself on the exchange of favours and on a revolving door of influence between elected positions and lucrative corporate and lobbyist careers. Meanwhile they use their weight and influence to whip labour and church leaders into line.

Add to this the combined power of Wall Street Super PACs (fundraising Political Action Committees) and you have a primary and political party which is hostile terrain for a candidate of the 99%.

One simple fact reveals the rigged character of the system: National polls consistently show Bernie Sanders enjoys, by far, the highest favourability rating of all presidential candidates, and beats all Republicans in head-to-head match-ups. Yet he will very likely be eliminated before the general election if he plays by the rules of the two-party system.

We are entering what is possibly the most favourable moment in US history to launch a new left party. Public trust is collapsing in both major parties, the establishment media, and all the key institutions propping up American capitalism.

Eight years since the Great Recession, with most workers still suffering despite the recovery on Wall Street, all the built-up anger and discontent is expressing itself in a bitter revolt against establishment Democratic and Republican leaders.

This is the context for the dramatic rise of Bernie Sanders - with a genuinely left-wing platform, refusing corporate donations, embracing the socialist label, and making the call for "a political revolution against the billionaire class" his central slogan.

The stronger Bernie's "political revolution" has become, the more it has threatened to break out of the straightjacket imposed by the Democratic Party which is completely dominated by big business.

That's why Socialist Alternative, and #Movement4Bernie are petitioning Bernie to continue running through to November as an independent or on the Green Party ticket with Jill Stein, if he is blocked in the rigged primary process, and to call a conference to discuss launching a new party of the 99%.

If there are concerns about helping elect a Republican, there is no reason Bernie could not at least run in the 40-plus states where it's absolutely clear the Democratic or Republican candidate will win, while not putting his name on the five to ten closely contested "swing states".

On the other hand, if despite all their dirty tricks against him, Sanders remains loyal to the Democratic Party and backs Clinton in the general election, it would mean the demoralisation and disorganisation of much of our movement.

We need a strategy to push back right-wing Republicans. But collapsing the anti-establishment movement behind Bernie into the Clinton campaign - a false unity with the candidate of Wall Street and the political establishment - would leave the field wide open for right-populists like Trump or Cruz to expand their base.

If Sanders chooses that path, continuing the political revolution will mean 'Sandernistas' boldly moving beyond Bernie.

An aggressive independent campaign for president by Bernie Sanders, linked to building a new mass party for the 99%, could dramatically transform American politics.

Bernie would not need to win the election to force a decisive leftward shift in US society. Even registering a vote of ten or 15 million for a new party (and the potential exists to win a far larger vote) could strike a crippling blow to the political monopoly of the two parties of American capitalism.

The stakes are simply too high to let this moment slip through our fingers. Capitalism is plunging humanity into a social and ecological catastrophe. Bernie's campaign shows a viable fightback is possible.

What's missing is a strategy to sustain and grow our movement. Now is the time for bold action to build a fighting, working class political alternative - a party for the millions, not the millionaires.

This is a shortened version of an article originally published on www.counterpunch.org