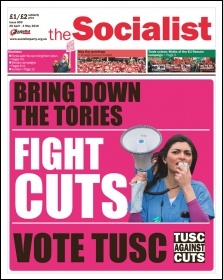 On 20 April, Leeds University student union held a hustings for Hyde Park and Woodhouse candidates in the local council elections. The idea was to get more students interested in local politics. TUSC candidate Ben Mayor made a strong case for why students should vote for anti-cuts councillors.

On a panel with the Green Party, Liberal Democrats, Ukip and the Conservatives, TUSC was the only anti-cuts party. While the Green Party often try to put themselves forward as being anti-austerity, their candidate stated that councillors' "hands are tied" over cuts.

Ben made it clear that TUSC fights for ordinary working class people and stand shoulder to shoulder with them during struggles. TUSC's programme of capping rents and setting up an ethical letting agency was popular.

Another topic discussed was sexual assault and safety. Ben was clear that sexual assault survivors need support and concrete measures to improve safety around the ward.

The Lib-Dem candidate instead gave the impression that sexual assault is a result of victims being irresponsible - showing how out of touch politicians are with the consent campaigns making up an important part of today's student politics.

Students in the audience were nodding along to Ben's points. The positive reception shows that students are ready for political change and are very open to socialist ideas.