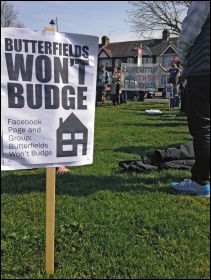 A happy ending may be in sight for tenants of the Butterfields estate in Walthamstow who have been campaigning since February to keep their homes. A housing association, Dolphin Living, has expressed an interest in buying all the homes and keeping tenants in them on their current rents.

Nicole, one of the leading organisers of the campaign, said: "It's very exciting. It's the very beginning of this process but we're hopeful. And we're so grateful for the work everyone has put into the campaign."

As the Socialist has previously reported, 63 homes on the estate were sold by their previous charity owner, the Glasspool Trust, to private developers Butterfields E17 Ltd. That company then began proceedings to evict all the tenants so they could sell the properties for a quick profit.

The Socialist Party has been campaigning with the tenants, exploring all avenues that may keep them in their homes. We have written to as many housing associations as possible and had interest from several, lobbied the council and issued draft motions calling on the council to act. We encouraged the tenants to set up a tenants association which has organised many of the meetings and protests.

The bottom line of the Butterfields Won't Budge campaign from the start was just that - the tenants would not budge. Socialist Party members strongly encouraged the idea that a strategy must be built around the idea that there would be no compromise on this point - no one was going to be forced out of their home.

The offer from Dolphin is a vindication of this approach. Only by staying well beyond when asked to leave by the landlords (despite intimidation and threats) and getting prepared for potential legal action and physical eviction resistance if that became necessary, have the tenants got this far.

Tenants are determined to keep the tenants association going and prepare for any future attacks. They stress that they have learnt a lot from the campaign - all are now more aware of the issues in the housing crisis and want to stay involved in the movement against it.

Margaret, another tenant, said that they have all done things they wouldn't have thought they were capable of - being interviewed on television, for example. This group of working class people have been knitted together through this struggle and have found their political voices.

Any victory for the Butterfields Won't Budge campaign must be the start, not the end, of a major fightback against the housing crisis in Walthamstow. We must use the momentum to organise resistance against other local attacks - including the Orwellian sounding 'Walthamstow Development Plan'. This threatens to demolish much of the local market and build yet more expensive, private homes on public land, including on a children's playground.