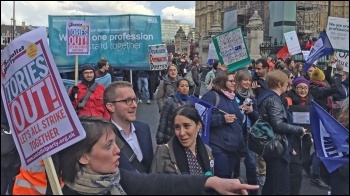 Striking together could topple the Tories, photo by Senan   (Click to enlarge)

Despite 'Dodgy Dave' Cameron's tax affairs and the government's partial u-turns over cuts to tax credits and disability payments, the Tory austerity juggernaut rolls on.

The latest exposé shows that Treasury cuts to the much delayed and costly Universal Credit benefits system will leave millions worse off, with some families losing £3,000 a year.

Insecure work, low pay and a dire housing crisis have left millions more facing an uncertain future. Young people in particular are under the government cosh - with a lower minimum wage, reduced or no housing benefit to mitigate rip-off rents, and unaffordable tuition fees to study at university.

But these cuts and more besides, over the last eight years, have not led to a booming economy. On the contrary, even the CBI bosses' organisation and the Office for Budget Responsibility have recently downgraded growth in the UK's anaemic economy.

The only group of people to benefit in this age of austerity and capitalist crisis has been the tax-avoiding super-rich and giant corporations.

The majority have had enough. Junior doctors are standing up against Tory attempts to undermine the NHS. Teachers are preparing to fight government-imposed academisation of our schools. Steel workers are demanding nationalisation to save jobs and their industry.

The Tories may be hoping that Labour's right-wing attacks on Corbyn will save them, but the likelihood is that the Tory party will be ripped apart following the June EU referendum.

But we can't simply rely on the Tories imploding. Nor can we wait until the 2020 general election to boot them out. We need change now!

The Hillsborough victims' families showed that a determined and tenacious pursuit of justice can beat the establishment.

The trade unions, representing millions of workers and their families, have the potential - if they campaign, organise and coordinate their actions - to dump this rotten government. The unions should call a national demo in support of the junior doctors and against cuts. This should be used to build for coordinated strike action - the beginning of a serious movement to end austerity.