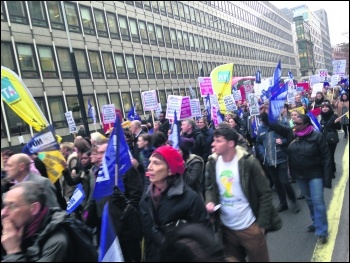 Tory education secretary Nicky Morgan's zig-zag over academies is a testament to the campaign work spearheaded by the National Union of Teachers (NUT). But the threat to teachers' pay and conditions still stands.

Morgan boasted there was "no reverse gear" when it came to forced academisation of schools. On 6 May, that was proven to be incorrect. She announced that not all schools would immediately be forced to become academies.

This is a victory for the NUT. Undoubtedly the threat of industrial action in defence of teachers' pay and conditions was a key part of this.

It is also another sign of the weakness and division within the Tory party. Many MPs and council leaders, especially in the Tory shires, balked at the idea of 'their good and outstanding schools' being taken away from them. This should be welcomed.

But Defence Secretary Michael Fallon told the BBC on 7 May that "it's not a u-turn on academies, that is still the aim. We want every school to be an academy in the next five years." The more astute Tory strategists see this only as a tactical retreat. They hope to sneak academies through one by one instead.

And the Department for Education has explained that regional education commissioners can still force individual schools or authorities into academy status. The criteria are 'underperformance', or a 'critical mass' of academised schools in the authority.

As NUT general secretary Christine Blower put it in the Huffington Post: "This is the third major education u-turn by government... in a month."

But she also rightly said that "the threat to state education in England has not gone away... The NUT's job will not be complete until we have finally lifted the threat to teachers' jobs, pay and conditions."

There is still no protection for teachers' pay and conditions, and our ballot for national strike action must continue. Let's press the advantage, build for a 'yes' vote to strike action, and force the Tories back.

What we are striking for