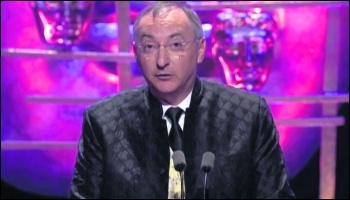 The director of Wolf Hall Peter Kosminsky   (Click to enlarge)

The director of hit historical drama Wolf Hall slammed Tory attacks on the BBC with his Bafta acceptance speech. Peter Kosminsky said government cuts would "eviscerate" the Beeb and Channel 4.

Kosminsky also compared Tory threats to the state broadcaster's independence to "those bastions of democracy Russia and North Korea".

He received a standing ovation for his remarks.

The Federation of Entertainment Unions, including performers' union Equity, technicians' union Bectu and the National Union of Journalists, has proposed an 'alternative white paper'. However, union leaders have yet to link their 'Love It or Lose It' BBC campaign to effective industrial action.