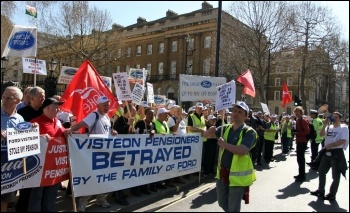 It is becoming increasingly clear from the different bids to take over (or be virtually given) all or part of Tata Steel's UK operations, that none of the potential buyers will take on the £15 billion pension scheme. This includes Excalibur who are proposing 1,000 extra job cuts.

It is likely that any buyer will make pensions a 'red-line' issue in negotiations with Tata and the UK government. This is because the steelworkers still retain a final-salary defined-benefits (DB) pension.

DB pensions have been an historical gain for workers such as those in Tata and other well-organised union workplaces in the private and public sector because the pension risk is on the employer as the pension on retirement is based on a workers' salary (usually the best year in the last ten) and years' worked.

In inferior pension types such as defined contribution schemes, the risk is on the workers as they build up a pension fund through weekly or monthly payments out of their wages by themselves and the employer.

Companies have been trying to close DB schemes altogether or at least to new starters.

In fact, this actually nearly caused a strike in Tata Steel UK last year, which had the effect of getting the company to reduce the deficit to under £500 million.

As BHS workers are finding out at the moment, the tactic used by companies is to put the business into administration with the pension liabilities going into the government-run Pension Protection Fund (PPF).

Ex-Ford workers who had been spun-off by the company to Visteon, including hundreds in Swansea, saw their pensions go into the PPF when it went into administration in 2009.

But the pensioners won £28 million compensation from Ford after a struggle lasting five years. The position of the unions should be, 'how can we trust a buyer with our jobs and communities if they won't take on our pensions?'

You can't take over heavy industry and invest in it for the long-term on the cheap. The pensions issue is yet another argument for all of Tata Steel's UK operations to be nationalised 100% on a permanent basis.