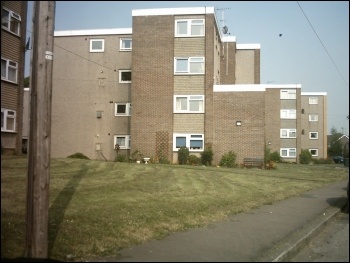 Photographer Robert Clayton's exhibition 'Estate' is a valuable reminder of what it meant to live in a council estate, and how Thatcherism continues to ravage this.

The estate he chose to photograph in 1991 happened to be where I was living at the time: Lion's Farm estate, Oldbury, in the Black Country.

His photographs - "without caricature, without attitude and without exaggeration" - capture the time. A time between "Thatcherism and the smiley Thatcherism of New Labour."

Jonathan Meades, the well-known architectural critic, describes it as when the 'post-war consensus' on the need for public housing was beginning to break down.

Two of the many photos feature graffiti saying "pay no poll tax". I was chair of the local anti-poll tax union. I did not know at the time that Clayton was taking these photographs, but am grateful he did. Too often the history books leave working class struggles unmentioned.

Meades comments in an accompanying film that Lions Farm was not a "green and pleasant land" - but neither was it a "dystopian slum". Thatcher's 'right to buy' policy was to speed up this process.

This often meant knocking down high-rise blocks. Lions Farm had nine. The council decanted six, and allowed them to crumble before knocking them down.

He further comments that Clayton's photos show an estate which was common to many others. Not yet completely neglected, but indeed on the cusp. It could have gone either way.

The photos of the high rises are not taken in the 'heroic tradition' as so often done in modern architecture - as standalone buildings - but are seen as part of the whole picture.

I would recommend Estate to anybody involved in the many campaigns to defend social housing from the ravages of the developers, and to end the housing crisis.