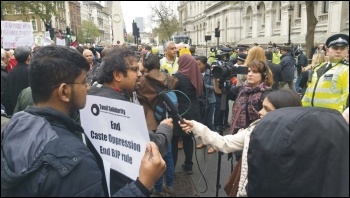 On 30 April and 4 May, the Tamil Solidarity campaign took part in lengthy TV debates and phone-ins, alongside numerous Tamil organisations, journalists and activists. Set up by IBC Tamil TV the discussions are being aired in four parts and will be viewed by hundreds of thousands of Tamils internationally.

They reflect the intense discussions taking place about how to take the struggle for Tamil rights forward. And this comes at an important time, as Sri Lankan president Maithripala Sirisena comes to Britain for a summit on corruption - presumably ignoring the record of his own government!

18 May also marks the anniversary of the end of the war in Sri Lanka - the slaughter of tens of thousands of Tamil civilians and the imprisonment of hundreds of thousands in concentration camps. Despite Sirisena's promises, and David Cameron's grandstanding at a Commonwealth meeting in 2013, there have been no moves towards a genuine investigation into war crimes.

Unfortunately, the establishment Tamil organisations seem to have lost sight of the need to build a strong, grassroots movement. The British Tamils Forum, for instance, is now closely linked with the Tories - even though their deep cuts to social and public services hit the vast majority of Tamils in Britain.

In Sri Lanka, the Tamil National Alliance, although part of the official 'opposition', works with the government. Yet under Sirisena no progress has been made on the right of Tamil self-determination. He is pushing through a neoliberal offensive, attacking the rights and living standards of workers and poor throughout Sri Lanka.

Tamil Solidarity, on the other hand, has always campaigned to link up the struggle for Tamil rights with the workers' movement and with campaigns of other oppressed people. And our message went down very well in the TV debate, especially with the phone-in audience.

We are holding a 'Solidarity Day' on Saturday 4 June at 12pm at the Unite the Union office at 128 Theobald's Road, London, WC1X 8TN.

Tamil Solidarity has organised a debate on the way forward for the Tamil movement. We will also be bringing together activists from Kurdish, Kashmiri and Bangladeshi groups ending in a rally with speakers from trade unions in Britain, the junior doctors' dispute and many others.

So we encourage all Socialist Party members and supporters to come along to a great day of solidarity!