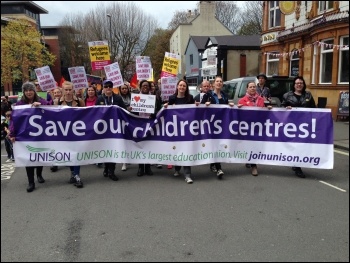 "No ifs, no buts, no children's centre cuts" was the rallying cry at the largest Chesterfield May Day demonstration for many years on 2 May. Shoppers applauded the most vibrant section of the demonstration - local children's centre workers themselves - as they proudly carried a huge Unison campaign banner and Chesterfield Trade Unionist and Socialist Coalition placards.

The increased turnout is not insignificant. Socialist Party members in north east Derbyshire have reported an increasing mood of defiance over recent months, based mainly on the struggles of the junior doctors. Most noticeable were the number of women involved and the average age of marchers being much lower than normal.

Derbyshire's children's centres - 32 of which are under threat of closure from the Labour-controlled council - are staffed mostly by women, with up to 200 of them facing the sack.

In recent weeks, many of these have been out on the streets leafleting and collecting signatures against the closures. Local government union Unison estimates up to 50,000 people have signed their petition.

Dave Gorton, area organiser for Derbyshire Unison told the Socialist: "There is no support for these closures and, with county council elections next year, I'm surprised the Labour administration is continuing with its extremely unpopular plans".

The Socialist Party calls for the council to abandon these cuts, along with others, and use reserves for the next year to 'plug the gap'. In the meantime, the council should unite with the unions, community groups and anti-austerity campaigners to build a joint campaign to secure more funding from the weak Tory government. Simply making the cuts the Tories tell them to is helping no one.

The May Day festivities included an EU referendum meeting where Socialist Party member Karen Seymour shared a platform with Arthur Scargill, over 50 copies of the Socialist were sold and well over £100 raised for the fighting fund.