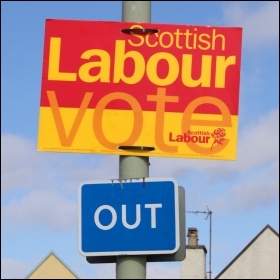 The SNP won the Scottish parliamentary elections on 5 May, although they lost their overall majority and will govern as a minority administration at Holyrood with 63 MSPs.

In a catastrophe for Scottish Labour, the Tories were second on 31 seats, pushing Labour into third on 24. The Scottish Trade Unionist and Socialist Coalition (TUSC) saw its vote increase in the six seats we contested.

Turnout at 55% was down significantly compared to the "electoral uprisings" against austerity and the political establishment witnessed in 2014 and 2015.

The decision by Nicola Sturgeon to pose holding the front page of the Scottish Sun after the paper endorsed a vote for the SNP, just a few days after the Hillsborough inquests, caused great anger.

There has been much made in the media of the gains made by the Tories in Scotland in doubling their number of MSPs from 15 to 31. A key factor in the Tory gains was their ability to attract No (to independence) voters - including some of what is left of Labour's support - as "the best option".

Labour, in contrast, saw its vote fall even further from the disastrous calamity of the 2015 near wipe-out when losing 40 of their 41 Westminster seats.

Scottish Labour is still paying the price for its role in Project Fear and years of Blairite policies that combined to shatter its base of support among the working class. Nor is there any sign of a significant left emerging in Scottish Labour.

One new Labour member who joined in the wake of Corbyn's victory described feeling physically ill after attending their first Labour meeting in Glasgow because it was so right-wing.

Scottish TUSC contested six constituency seats and all were members of Socialist Party Scotland. The total TUSC vote was 3,540, an average of 590 votes per candidate. This compares well with the 184 per candidate in 2015, a more than trebling of the vote.

Our top vote was 909 for Brian Smith in Glasgow Cathcart. TUSC polled 2,047 votes in the three Glasgow seats.

The clarity of TUSC's platform; no support for the SNP and Labour in their implementation of austerity, for socialist policies to tackle the economic crisis and for the building of a new political movement for the 99%, was well received.

For a longer version see www.socialistpartyscotland.org.uk