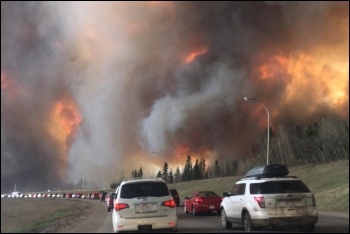 On the evening of 3 May the entire 94,000 population of Fort McMurray was ordered to leave as an out-of-control wildfire swept towards it. Most people had a terrifying drive through clouds of smoke, with flames in sight and burning fragments falling onto the road.

The heroic effort of firefighters - working 23-hour shifts in extreme danger - saved some 90% of the buildings in Fort McMurray. However, 2,400 buildings were destroyed and much of the city's infrastructure is out of commission.

Amazingly, the only reported human loss of life was two people who died in a road accident.

The response to the fire and evacuation has shown that people, contrary to the ideology that greed and selfishness are good, are capable of enormous generosity and solidarity.

As people fled south from the fire, people along the way provided fuel, drinking water and even diapers for babies.

As in most disasters, its impact has not been evenly spread. If this fire had taken place in a poor country, the fatalities would have been far higher.

Even in Alberta though, workers suffered loss of homes and forced evacuation, while the CEOs, on $10 million a year, and senior management of Fort McMurray's industry, were safe in Calgary.

Fort McMurray's main industry is extracting the bitumen from the tar sands to produce crude oil. The tragic irony of the fire threatening the centre of Canada's fossil fuel industry has provoked both silence and debate. Because of sensitivity about the tar sands, it is deemed an out-of-bounds topic.

Elizabeth May, leader of Canada's Green Party, was widely condemned for saying that the fire was "very likely a climate event". Justin Trudeau, Canada's prime minister, joined in the criticism saying her comments were "neither helpful nor entirely accurate".

Fort McMurray is surrounded by boreal forest, part of the largest land-based ecological zone that rings the northern hemisphere.

Burning fossil fuels, which are the main product of Fort McMurray, causes global warming. The average annual temperature across Canada has increased 1.3°C since 1948, while in Alberta the increase is over 2°C since 1950.

The winters are shorter and warmer, resulting in reduced snowpack and, with earlier spring, the snow melts sooner. In parts of northern British Columbia, next door to Alberta, the snowpack in May was 25% of the historic average.

The summers are hotter, increasing evaporation. An increase of 1°C in temperature requires a 15% increase in precipitation to maintain the same level of moisture on the ground.

Hotter summers mean more lightning, a major cause of fires. Warmer winters allow more insects to survive the winter, weakening trees and increasing the amount of dead wood to burn.

These trends add up to increased likelihood of fires which will accelerate as global warming continues.

A group of 70 forest fire experts met in 2009 and agreed that fires were bigger and hotter and this will intensify. In the early days of the Trudeau government, Natural Resources Canada staff told the new minister that wildfires were becoming worse and governments were not providing enough resources to assist communities to prepare.

However, every barrel from the tars sands adds to climate change. It does not matter if the oil is burnt in Canada, China or elsewhere. The world has a global weather system.

Rather than continue an industry that contributes to more disasters and is vulnerable to market instability, why not change? The case for a serious and determined transition to renewable energy and energy efficiency is overwhelming from environmental, health and safety, and economic standpoints.

An energy transition will provide far more good jobs than the tar sands and with guaranteed re-training many workers would prefer such work.

With the resources of the energy companies in democratic public ownership, Canada could become a clean energy society with good jobs.

The Canadian government is facing two contradictory ways. At the Paris climate change conference they supported limiting the increase of global temperatures to 1.5°C. Yet they are determined to build a pipeline from the tar sands to the ocean, which will add to global warming.

The campaign to stop fossil fuels in order to stop global warming is linked to the fight for good jobs. It is not a choice between jobs or the environment.

The real choice is between capitalism, with its attendant environmental destruction and mass unemployment, or socialism with good jobs and a healthy planet.