Link to this page: https://www.socialistparty.org.uk/articles/22912 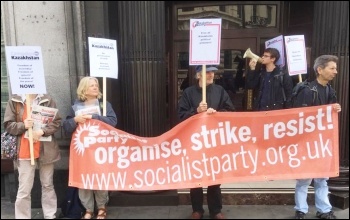 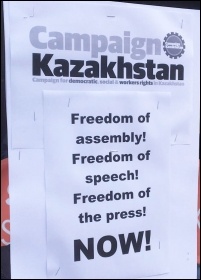 Protesters from Campaign Kazakhstan and the Socialist Party delivered a letter to the Kazakhstan embassy in London condemning the actions of the Nazarbeyev regime. There were chants of "Free all political prisoners" and speeches of solidarity with protesters fighting against land privatisation and for democratic rights against the corrupt regime.

The embassy locked the doors as soon as the protest arrived and refused to accept the letter, and someone was sent out to take photos. It clearly rattled them that people will continue to expose the nature of the Kazakhstan regime and protests will continue in Kazakhstan and abroad.

For an article on the CWI website about the large demonstrations taking place in Kazakhstan go to:

This version of this article was first posted on the Socialist Party website on 27 May 2016 and may vary slightly from the version subsequently printed in The Socialist.