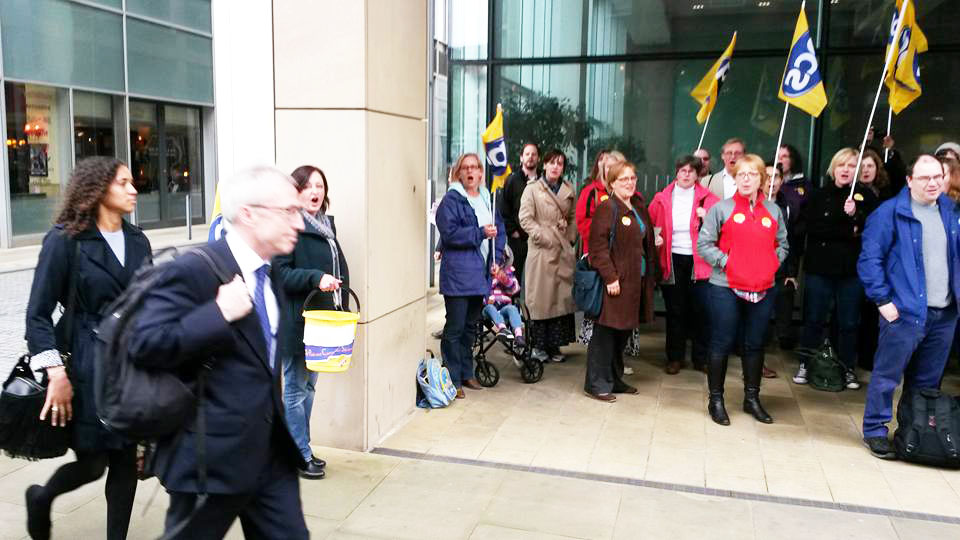 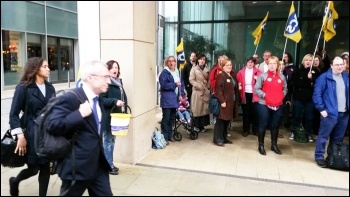 Confirmation of the Business, Innovation and Skills (BIS) Sheffield office closure was made by intranet at 11am on Thursday 26 May. For the civil service workers whose jobs are being moved to London this decision was not unexpected but there was always a hope that the tremendous campaign they’ve conducted over the last 3-4 months had changed the government’s mind.

Disappointment quickly turned to anger and determination to fight on. Around 60 PCS union members picketed the office on Thursday, their third day of strike action. The BIS Permanent Secretary and his board members were forced to walk sheepishly through the pickets. But they had to cancel their meeting with staff because they were all out on strike!

Ironically BIS is the government department responsible for picketing guidelines, including the limit of ‘only six’. Well there were ten times that number picketing the BIS office. So much for the anti-union laws.

With the BIS bosses holed up inside the building, the strikers held a union meeting in front of the main entrance. Marion Lloyd, PCS group president for BIS, gave an impassioned and defiant speech proposing another two days of strike action on 2-3 June which was unanimously voted for.

The campaign to save Sheffield BIS isn’t just about these 250 jobs. Sheffield has been devastated by announcements of job losses in the last six months: HMRC 500, the council 400, HSBC 600 and Polestar 600.

As PCS industrial officer Lois Austin said: “This decision affects not just BIS Sheffield and the regional offices but also the city of Sheffield as a whole, where jobs are being ripped out across the public and private sector. It will be reduced to a 1980s ghost town if the government has its way.”

These workers have the support of the whole PCS union which voted unanimously at its annual conference to support the campaign, with over £1,000 in donations made for the hardship fund. Over £200 was collected in buckets during the last two days of strike action from colleagues working in the same office building for another government department.

This version of this article was first posted on the Socialist Party website on 27 May 2016 and may vary slightly from the version subsequently printed in The Socialist.