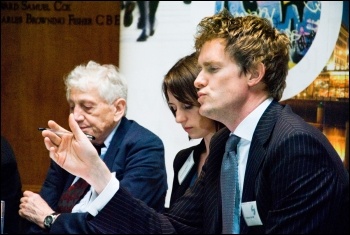 Tristram Hunt MP, the privately educated son of a baron, thinks he has lost touch with the working class, photo by Centre for Cities (Creative Commons)   (Click to enlarge)

Disgruntled Labour right wingers are producing a new pamphlet trying to explain why they lost the 2015 general election.

The collection of essays includes this insight: "Increasingly the Labour Party was viewed like middle class Ryanair passengers having to stomach a couple of hours' flight with people they shared little in common with. It could be uncomfortable but it got you where you needed to go." Of course, most middle class people would struggle to identify with these capitalist shills' lifestyles too.

The Blairites conclude that their problem is a lost connection with the working class. In the case of the pamphlet's editor, Tristram Hunt, the privately educated son of a baron, the Socialist wonders if there ever was one.

The answer? Apparently, to stop attacking austerity, and instead patronise working class and middle class people by appealing to our cultural 'identity'.

The fact that Labour actually supported austerity, and didn't address any of the fundamental social problems workers face, couldn't possibly be responsible.