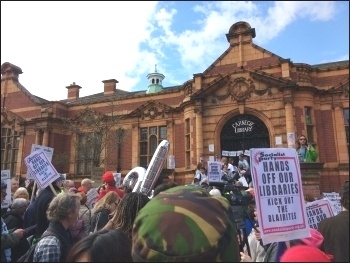 March to save Carnegie library in Lambeth, 9.4.19, photo James Ivens   (Click to enlarge)

A south London borough which closed two libraries to 'save' money is spending more than twice as much on security as it would have cost to keep them open.

Ultra-Blairite Lambeth Council laughed off mass community opposition - and an occupation (see socialistparty.org.uk) - to shut the two sites. Its plan is to convert them into private gyms. The excuse, as ever, was "blah blah Tory cuts blah difficult decisions blah."

A Freedom of Information response gave the private security costs as £2,212 a day. Lambeth's 2014-15 budget said the combined running cost for both was £874 a day.

Most Labour councillors don't pass on cuts because they 'don't have a choice'. They do it because they agree with them. Corbyn should follow TUSC's example and give a fighting lead to those who don't - by calling for legal no-cuts budgets.