Engaging attack on finance capitalism and the capitalist media 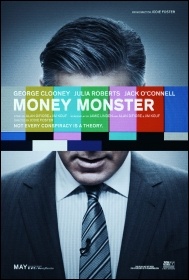 Nevertheless, for a major Hollywood film it is a pretty devastating exposé of capitalism. Particularly the corruption of finance capitalism, and the continuing decline of serious journalism that allows it to go unchallenged.

It is tragic, comic, frantic and farcical in equal measure and has a flow that keeps the audience gripped and engaged.

As it gets underway, Gates is taken hostage by Kyle Budwell (Jack O'Connell). He has lost $60,000 on one of the show's share tips, on behalf of the Ibis corporation. His financial loss, and that of thousands of others, followed an instantaneous 'loss' of $800 million through a computer "glitch" (look out for that word, it crops up a lot in the film).

He then makes a desperate bid to get to the truth of how his and other investors' money was lost. He ends up finally getting the answers, but with a tragic conclusion.

In between, we see how so-called news organisations and former 'serious' reporters have ditched any pretence of integrity in covering news to become mouthpieces of big business. We also get a hard-hitting exposure of the incredible corruption and disregard for 'legality' of one wing of modern capitalism.

We see also how the unfolding events themselves become a piece of live TV theatre which grips an international audience - reminiscent of the OJ Simpson car chase - but which immediately becomes personalised and trivialised by the media's coverage.

The film has strong performances from Clooney, O'Connell, and Julia Roberts as Patty Fenn, the show's director who has marginally retained some pretence of being a credible investigative journalist.

I never expect to come away from a Hollywood film pleasantly surprised that it has called for the overthrow of capitalism - and Money Monster didn't do that.

But I think anyone who is outraged and wants to take action will feel, having seeing the film, it did a good job of exposing capitalism and the decline of investigative journalism.