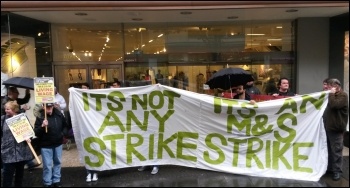 Boparan is known in the business as the 'chicken king'. According to the Sunday Times Rich List he, together with his wife, has a personal fortune worth £1.35 billion. 2 Sisters is the largest food company in the UK owning brands like Fox's Biscuits, Goodfellas Pizza, Holland's Pies, Harry Ramsden's fish and chip shops and supplying ready meals to Marks and Spencer.

Using the excuse of implementing the National Living Wage, Boparan is following the trend of private sector employers attacking the premiums and terms and conditions of workers at site after site, in particular cutting premium pay for weekends and bank holidays. One couple, both working weekends at the Pennine Foods factory in Sheffield told me that they would lose £14,000 a year from their household income!

But workers are fighting back. Last summer, over 400 workers, members of the BFAWU bakers and foodworkers union, at the 2 Sisters owned Gunstone's factory near Sheffield, went on strike for the first time ever to win a pay rise.

Two weeks ago, on 19-20 May, 500 BFAWU members at Pennine Foods also struck for the first time ever against the imposition of a new contract removing all premium pay. They will strike again for another 48 hours on 5 June.

Pennine workers have been boosted by news that 400 of their BFAWU colleagues at 2 Sisters owned RF Brookes factory in Rogerstone, Newport, South Wales are starting 48-hour strike action against 20-25% pay cuts on 2 June.

Dai Mort, BFAWU branch secretary at Brookes, explained that workers are striking against a cut to night shift allowance and overtime rates. Some workers could lose nearly £3,000 a year and workers under 25 years will be paid 50p an hour less. Pennine workers will be sending a car down to the RF Brookes picket line in solidarity.

And 440 Unite union members at the Pizza Factory (also owned by 2 Sisters) in Nottingham are currently balloting over a pay claim, with the result due on 6 June.

So, in the next few weeks, workers at three 2 Sisters factories could be taking strike action together.

Shop stewards should coordinate strike days and use these disputes to build a 2 Sisters shop stewards network.

That would stop management from being able to transfer production, and especially hit Marks and Spencer who are supplied by both the Pennine and RF Brookes factories. Strike action plus a leverage campaign of picket protests at M&S stores can win a victory for the workers.