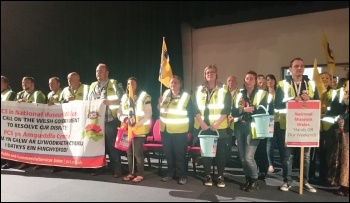 As Mark Evans pointed out in the debate on public services, the Welsh Government the trade union leadership defends is now a 'Lib-Lab Government'.

The Welsh electorate punished the Liberal Democrats in May for propping up Cameron for five years by virtually wiping them out. But Welsh Labour is giving the sole remaining Lib-Dem assembly member the Education Ministerial portfolio.

But we weren't the only ones exposing the Welsh Government. In the debates on public services, local authority cuts and education, workers gave example after example of cuts to services, job losses and attacks on pay, terms and conditions by either the Welsh Government or Labour councils.

The gap between the claims that are made on behalf of the Welsh Government and the reality of working in public services in Wales was starkly illustrated at Wales TUC by the attendance of Amgueddfa Cymru/National Museum Wales PCS members. They are on indefinite strike and came to collect for their hardship fund. They also heard fellow striker Tony, move a motion on payments for weekend working and demand the Welsh Government resolve this dispute.

It is a scandal that the Welsh Government has allowed this dispute to go on for over two years; they demand the UK government intervene on steel but have failed to do the same in a devolved public service.

One of the most significant debates of the conference saw the Wales TUC give its unanimous backing to the demand for councils and councillors who claim to be anti-austerity, to stop voting for council cuts and instead set and vote for legal no-cuts budgets.

The courageous all-out action by PCS members at National Museum Wales has entered its fifth week. Workers picketing the museum's Battle of St. Fagans re-enactment on 28 May were confident victory was in sight. The museum's board of trustees had met to discuss a possible deal but refused to report the meeting's outcome before the directors went on holiday!

The Welsh Government has been forced by the massive campaign of the museum workers and the solidarity they have received to intervene and roll back some of the cuts to the museum's funding to facilitate a resolution of the dispute.

The museum workers have been bowled over by the solidarity and ovations they received at PCS and Wales TUC conferences and the thousands of pounds collected and donated by trade union bodies including the £159 collected by the National Shop Stewards Network outside Cardiff Queen Street station.