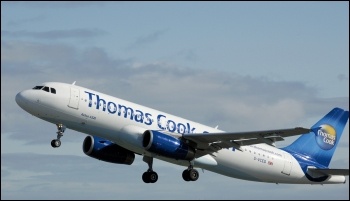 A Thomas Cook passenger plane - cabin crew are to strike against cuts to break times, photo by Arpingstone (Creative Commons)   (Click to enlarge)

In a fortnight of headlines littered with outbreaks of industrial disputes, 25 May didn't disappoint. Thomas Cook cabin crew in Unite the Union voted by 74% to enter in to dispute with their employer.

Operating in ten UK aviation hubs by providing package holiday deals, the company's revenues for six months up to March were a staggering £2.7 billion.

These eye-watering margins haven't translated into gains for workers though, whose terms and conditions are under attack. The basis for the dispute is health and safety, as breaks have been reduced from two to one for every 12-hour shift worked.

All cargo is precious, not least the human cargo aboard these flights. A cursory examination of Aeroinside, an industry publication documenting safety incidents, reveals that, not unlike other operators, Thomas Cook relies heavily on its flight crew to ensure the safety of passengers. Flight crew deliver vital safety guidance and provision of specialist emergency management during incidents. In the same six month period to March, Thomas Cook returned to profit for the first time in five years, generating a pre-tax profit of £50 million. So, why is a company that is returning to financial health attacking its frontline staff?

To answer this question, the Socialist urges Unite to table a request at Acas for the management to open its books to the democratic scrutiny of Unite convenors and stewards at the company, to gain a clearer understanding of which salaries may require review.

With airline flight staff salaries averaging only £14,824 a year, we doubt strongly that these expenditures, or the two breaks for every 12 hours worked suggested by the government's regulator the Civil Aviation Authority, are the source of the underlying financial problems at Thomas Cook.