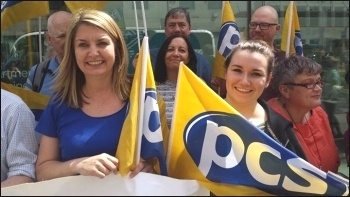 The PCS campaign against Land Registry privatisation has been stepped up a notch following unanimous endorsement of our strategy and campaign by PCS conference, which pledged further practical and financial support up to and including the use of industrial action to defeat the government’s ill-conceived plans.

This has not only given our members a massive boost, but also sends a clear message to our management and the government that we will do whatever it takes to defeat the notion of Land Registry privatisation once and for all.

Alongside our industrial campaign we have been working closely with customers and others with an interest in land including many industry experts. Public opinion is also clearly against what is planned and nearly 300,000 people have signed a 38 Degrees petition against Land Registry privatisation. 38 Degrees has confirmed that this is the largest response it has ever had to a petition of this type. 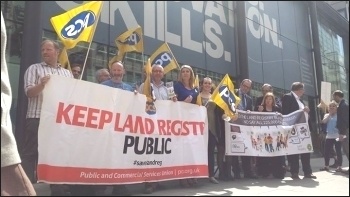 The petition (so far) was handed into the Department for Business, Industry and Skills (BIS) on 26 May, the day that the public consultation ended. This event was attended by a large crowd including PCS members, conveyancers, other pressure groups and MPs, but unfortunately neither Sajid Javid MP (minister for BIS) or other BIS officials were prepared to collect the petition in person.

This may be because they are rather busy at the moment – the last time a public consultation was run on the issue of Land Registry privatisation, less than 100 consultation responses were received, this time round we believe that over 30,000 responses opposing privatisation have been received!

We have also been campaigning politically, getting our members involved in lobbying their MPs; and PCS reps have been meeting with MPs to set out the reasons for opposition which were set out in the forensic PCS response to the public consultation.

It has been interesting to see that around a third of the MPs who have met with us have been Tories who are uneasy with what is being proposed, one of whom made the point that while he is not opposed to privatisation in principle, privatisation of Land Registry could have a serious negative impact on the housing market and therefore on British capitalism!

It has also been interesting to see that even the right wing press has come out solidly in opposition, describing it as “a privatisation too far”.

With this level of opposition it is hard to see how Osborne can proceed with his plan, as he appears to be the only person who thinks that it is a good idea. Clearly, if he were to be removed from office following the EU referendum, the likelihood of defeating privatisation would be increased.

Either way, PCS is organised, determined and ready to do whatever it takes to defend our members’ jobs, offices, and terms and conditions, and the vital public service we provide.