Link to this page: https://www.socialistparty.org.uk/articles/22965 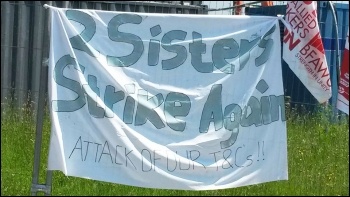 "Solidarnosc" replied the Polish waggon driver when told by pickets that there was a strike on at Pennine Foods in Sheffield. His mate parked up and both joined us on the picket line waving BFAWU bakers' union flags, and for a coffee. 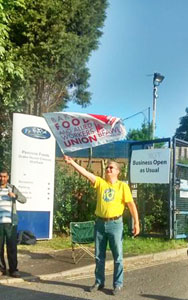 "The workers united will never be defeated" rang round the picket line when the artic cab that had been parked up for four hours waiting to get into the factory to take two deliveries out, finally turned round and left. The cab driver didn't want to cross the line that he described as a "war-zone" (a bit of an exaggeration for a peaceful but resolute picket which was never less than 100 strong).

This gave victory to the pickets whose determination had faced down the 2 Sisters company bosses and a nervous South Yorkshire police throughout their second 48-hour strike (5-6 June), meaning not one lorry went in or out of the factory. The 'sweet-talking' police liaison officer told us that the management "have given up" trying to move anything.

Polish strikers had spoken to Polish drivers. A Romanian striker spoke on the phone to a Romanian driver. This strike involving 400 English, Eastern European, Asian and African workers has been a marvellous celebration of workers' solidarity in action against the common enemy of a billionaire boss imposing pay cuts of up to £5,000 a year on low paid workers through cutting premium payments. Even a few agency workers have walked out in support. 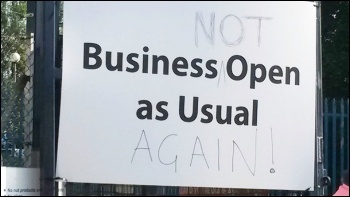 This strike has cost the company thousands of pounds in lost and wasted production. After the first strike, management sent employees a letter saying how disappointed it was, but that the strike hadn't affected production. Well, after this strike the 'amended' "Business NOT open as usual" sign on the factory gates tells it as it really is.

This is the first strike in the site's 28-year history but workers have learned fast in struggle. They voted unanimously on the picket line to escalate the next planned two-day strike into a week-long strike commencing on Thursday 16th June. The first two days will coincide with a second 48-hour strike by BFAWU members at the RF Brookes factory (part of 2 Sisters group) in Newport, South Wales. 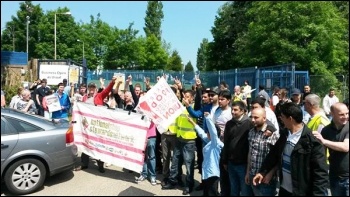 Both these factories supply Marks and Spencers with ready meals so the BFAWU will be calling for trade unionists and socialists to 'protest picket' M&S stores around the country as has already happed in Sheffield. Such a 'leverage' campaign as an adjunct to escalating coordinated industrial action and determined picketing can score an inspiring victory for the BFAWU and all workers suffering at the hands of millionaire bosses.

This version of this article was first posted on the Socialist Party website on 7 June 2016 and may vary slightly from the version subsequently printed in The Socialist.