From The Socialist newspaper, 8 June 2016 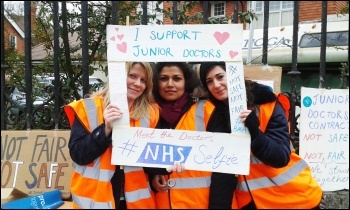 Junior doctors are being consulted by their union the BMA over the government's offer to settle the longstanding dispute over the new contract.

The Tories have been shocked by the incredible campaign of strike action that has seen picket lines of hundreds of junior doctors and peaked on the last two-day walkouts at the end of April which were escalated to the removal of emergency cover. This resulted in consultants covering for striking staff but they were overwhelmingly supportive with some reportedly telling junior doctors to make sure that they were on the picket line!

On the first night of that strike on 26 April, over 4,000 junior doctors marched with teachers and other trade unionists and health campaigners to the Department of Health. This was in stark contrast to the TUC and the majority of the union leaders, who have allowed the BMA to fight alone, even though many health workers understand that they would be next if junior doctors are defeated.

Indeed, on the second day of the strike, the TUC general council ignored the call of civil servants' union PCS and the Fire Brigades Union for a national day of action in support of the junior doctors.

Tory Health Minister Jeremy Hunt was forced back to the negotiating table and had to reverse his threat to impose the contract. Therefore, the new concessions made by Hunt are as a result of the action. But Hunt has made it clear that the offer is 'cost-neutral' in that there is no extra money on the table. This means that the concessions are paid for in other parts.

Basic pay would increase by an average of 10-11% instead of the 13.5% in the previous proposed contract. The offer still removes premium payments for Saturdays; a main grievance of junior doctors, and in addition will remove premium payments for Sundays too. Instead they will be paid an allowance of just 3% of basic pay if they work at least one weekend in eight, rising to a maximum of 10% for working one in two.

Also, the premium for night shift working is reduced to 37% from the 50% in the previous contract that Hunt attempted to impose. The new contract still discriminates against junior doctors working part-time, many who will be women with care responsibilities or doctors with disabilities.

Concerns about unsafe hours being worked and staff coverage would remain. This will be monitored by a 'guardian of safe working hours' but they would be appointed by and accountable to the Trust Board and junior doctors would be rightly suspicious of their powers.

This new inadequate offer should be rejected by junior doctors because it can be defeated if determined action is continued and escalated. A new programme of strikes should be called.

But we also call on the BMA to demand an emergency meeting with the TUC general council to discuss the building of a mass campaign of joint strikes and demonstrations, including a national Saturday mobilisation in London. This can be a spring board to a mass movement to inflict a total defeat on the Tories.

No to Tory and EU austerity

Youth must fight for their future

Letter to the Socialist: EU referendum

Exploitation Britain: Unionise and fight for a living wage