Link to this page: https://www.socialistparty.org.uk/articles/22992 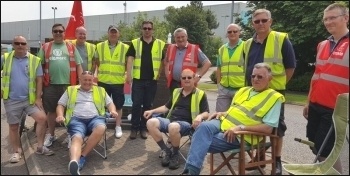 Six day strike at Argos depot against contracting out of jobs

A six day strike by over 400 Unite members at the Argos Lutterworth depot in Leicestershire began just after midnight on 7 June. Warehouse and admin staff are out alongside drivers. 96 drivers are being transferred by the company to Eddie Stobart Ltd. They are demanding that the company cancels the transfer, which is meant to happen on 12 June. Argos gave very short notice, allowing the union little time to organise a ballot.

Stobart's has a bad record on workers' terms and conditions and Unite members believe that they would be under threat if the transfer goes through. In 2012 for example, as reported in the Socialist, 183 Tesco drivers in Doncaster were transferred over to Eddie Stobart, yet within one month were all given notice of redundancy.

Larry McGlinchey, Unite steward in the warehouse, spoke to the Socialist on the picket line:

"We had a ballot and got a 75% vote for a strike. We have a national agreement with the company around changes in terms and conditions, but they decided to ignore that and just go ahead and Tupe our drivers over with the minimum legal notice.

"If it does go ahead, we asked Argos to build remaining on the same terms and conditions for the next three years into the terms of the transfer. They refused. We asked them details about what will happen in the warehouse, because we believe that the warehouse will go the same way. We asked them to offer the drivers decent severance if they decided not to transfer over to Eddie Stobart. Argos wouldn't give us any guarantees.

"This is an important issue. The only reason the strike is limited to six days is because the jobs are due to get transferred over to another employer - so the legal ballot doesn't stand. A lot of these drivers have been with the company 20 years; the least they could have done was to speak to us. They didn't."

This version of this article was first posted on the Socialist Party website on 9 June 2016 and may vary slightly from the version subsequently printed in The Socialist.