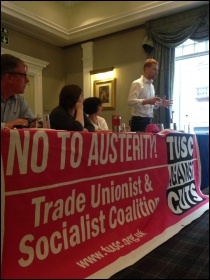 The 'Socialist Case Against the EU' tour held a lively and fraternal meeting in Cardiff on 9 June.

The tour is organised by the Trade Unionist and Socialist Coalition (TUSC), which supports a Leave vote, and includes transport union RMT and the Socialist Party.

The room was packed, in what is likely to be among the biggest meetings discussing the EU referendum in Wales. Discussion was energetic, as those who attended put to the test the lies and distortions the capitalist press pumps into society. We raised an impressive £150 towards campaign costs.

The approach of the Remain campaign in Wales can be summed up by one spectacle on 11 June. Alun Cairns, Tory secretary of state for Wales, climbing the Remain platform at a rally in Cardiff, speaking among Labour and Plaid Cymru representatives - in the shadow of the statue of celebrated socialist Aneurin Bevan!

One wit looked up at the back of the statue, visible behind the speakers, and quipped: "At least he's showing them his arse!"

It could not be more obvious that, on its own strength, the Tory government could not mobilise enough support to keep the UK in the European Union. They're relying on other parties, less hated by the working class, to save their bacon.

Contrast this shabby scene with TUSC's meeting. We built a united front of speakers from genuine workers' organisations, willing to come together to fight the EU 'Employers' Union'. This included Owen Herbert, regional secretary of transport union RMT; London regional secretary of firefighters' union FBU, Paul Embery, from Trade Unionists Against the EU; and Hannah Sell, deputy general secretary of the Socialist Party.

The animated, friendly discussion was a refreshing change from the rubbish spoken by the official Leave and Remain campaigns. The speakers outlined how the European Union is primarily a capitalist institution that inflicts austerity and privatisation on working people across Europe.

Some questions reflected the concerns of workers and young people that Brexit would mean the coming to power of a more right-wing government, possibly led by Boris Johnston. Hannah explained the Tory party could be devastated by the referendum. Its government is now a weak one, that the workers' movement should go on the offensive against.

But there is no fundamental difference between the Cameron and Johnson wings of the Tory party. Racism would likely rise on the basis of a Remain vote too, unless the unions and Labour leaders take the initiative.

The super-rich 1% might have a monopoly on wealth, the media and the state. But if workers get organised, we can shake them off with a shrug of our shoulders.