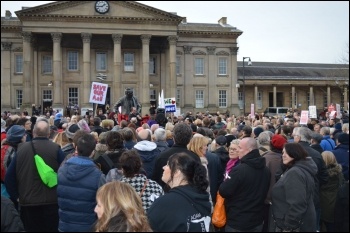 It's almost six months since the local Clinical Commissioning Group (CCG) announced it was intending to close Huddersfield A&E Department. Over 100,000 people have signed petitions demanding the CCG reverses its decision, and there have been countless rallies and protests all over the town.

The CCG's 'consultation' comes to an end on 21 June and the HandsoffHRI campaign group is now in full swing to ensure local people fill in the survey forms. Our target is to get more than 10,000 filled in. After that, we will have to wait for at least another four or five months to hear the outcome.

A public meeting on 20 June to launch the next stage of the campaign will be addressed by other campaign groups from around the country, including Chorley, Lewisham and Shropshire.

Huddersfield Socialist Party has been proud to continue playing an integral role in this hugely important struggle, initiating many of the activities and setting up the Youth for HRI Group.