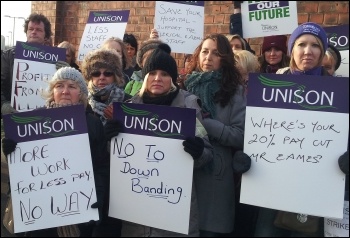 Delegates to the national conference of public sector union Unison gather in Brighton at a time of increasing challenges for the union. Figures produced by Unison show £11 billion has been cut from local government budgets in the last six years. In total half a million jobs have been lost in local government since 2010.

In the health section, our members have seen attacks on pay through down-banding and now threats to unsocial hours payments. Higher education and police and justice members are under constant threat from outsourcing.

To shore up the success of the onslaught on workers we now have the passing of the (anti) Trade Union Act, making it harder for members to take strike action.

Now more than ever the union needs decisive leadership to face up to the employers. There have been a number of opportunities this year to mobilise Unison members.

An even bigger opportunity to strike back was this year's local government pay dispute. Following a derisory offer from the employers, a Unison branch consultation overwhelmingly voted to reject. The National Joint Council (NJC) formally requested a ballot for strike action from the Industrial Action Committee (IAC).

However on the advice of the national secretary Heather Wakefield, the IAC turned down the request. It is a poor reflection of member-led democracy in the union when an unelected official like the national secretary can intervene and scupper a request for strike action by a lay body representing the biggest service group.

The role of Heather Wakefield and the 13 members of the NJC who voted to accept the deal against the wishes of the members will quite rightly come under scrutiny at conference with emergency motions from Manchester branch at local government conference.

While member-led initiatives for strike action are thrown in the dustbin, democracy at the very top of the union now has massive question marks hanging over it following the scandal surrounding the recent general secretary election. A leaked recording from the Greater London region led to allegations of interference by senior paid employees of the union in favour of the incumbent, Dave Prentis. This was followed by leaked emails from assistant general secretary Cliff Williams.

The leaked emails, if they prove to be authentic, seem to indicate Williams directing operations for the campaign to re-elect Dave Prentis, known as 'Team Dave'. An internal investigation is only focused on one person implicated in the scandal.

With doubts over the union's appetite for a fight with the employers and its national democracy in the spotlight, it is little wonder that many members have little confidence in the national union to mount a serious fight. It seems some members have drawn the conclusion that they are being left to fight branch by branch. This is one of the motivations for branches to seek a larger share of subs. If the union nationally will not fight, more money needs to stay in the branch where it can be used more effectively.

Recent developments all point towards a desperate need for change at the top of the union. The general secretary results - despite returning Dave Prentis - also point in this direction. For the first time in Unison's history, the winner got less than 50% of the vote. If a single anti-Prentis candidate could have been achieved (as the Socialist Party attempted to do in the run up to the election) then the union could have already begun to change.

However the divisions in the opposition camp may finally be coming to an end. The 'Raise the Profile' meeting on 21 June will see representatives of all those looking to change the union sharing a platform for the first time. The Socialist Party began the call for uniting the opposition to Dave Prentis and the bureaucratic machine surrounding him during the general secretary election with a call for a single candidate to challenge him.

This meeting is a further step in pulling together those forces which can open up our union and prepare it for action to fight on the issues facing our members. We hope it can be the beginning of the fight to give this union the fighting leadership it needs and its members deserve.