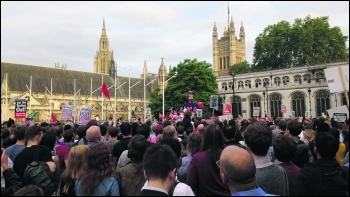 As Labour MPs met and attacked Corbyn, calling for him to resign, thousands of people gathered outside parliament on 27 June to demonstrate against the Blairites intent on removing Jeremy Corbyn from the head of the Labour Party. While inside MPs were chorusing "Corbyn resign!" the crowd outside joined in such chants as "Blairites out! Corbyn in!"

The need for an immediate council of war, consisting of trade unions, anti-cuts campaigners and socialists both inside and outside of the Labour Party, was well understood by people attending the demonstration. They wanted a clear strategy of how to fight back. And they agreed with the idea of using the support that Jeremy Corbyn has when he poses an alternative to the pro-austerity politics of New Labour, to kick out all the Tories.

Members of the Socialist Party put forward the need to kick out the 'blue' Tories: by Corbyn calling for an immediate general election following the resignation of the prime minister. And the need to kick out the 'red' Tories - the Blairites: by democratising and opening up the Labour Party, bringing in mandatory reselection to allow members to remove those MPs trying to reclaim the Labour Party for big business by removing Corbyn.

The Tories are weak and divided, the Blairites are on the attack, now is the time we must get organised and fight back!