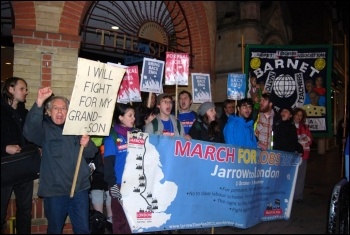 The capitalist media is falsely trying to paint the EU debate polarisation as 'selfish' older people selling out young people. This ignores the abject poverty of many pensioners. It ignores the anti-establishment sentiment underlying the Leave vote - shared by most young Remainers. And it ignores that pensioners fought to get us the NHS, education system and welfare state that successive Tory and New Labour politicians have gutted - with the EU's support. Socialist Party member Claude Mickleson, an activist with the National Pensioners Convention, explains that pensioners and young people face the same problem: austerity and capitalism.

I believe it is right of the Socialist party to encourage the young in particular to become engaged in left-wing politics. They are the future and will have to carry on the fight for real socialism when the older ones among us are gone - but not forgotten.

Contrary to the exertions of many commentators when courting the young, pensioners are not gaining any advantages over other sections of the population.

At parliament's recent 'intergenerational fairness inquiry', the National Pensioners Convention submitted a paper showing that the different generations are, as the man said, "all in it together" - at least the working class.

Pensioners have not escaped austerity. Like other age groups, health, property wealth and income are not evenly or equally distributed within the 'baby boomer' or earlier generations.

Older people still make a huge financial and social contribution to the life of the nation. Even after the state has paid for pensions, health care and other benefits, pensioners provide the treasury with the equivalent of an additional £40 billion through taxes, volunteering and unpaid caring.

Over the last five years, the so-called 'triple lock' pensions system - part of the Liberal Democrats' contribution to Coalition government attacks - has cut increases in the basic state pension. The triple lock raises pensions by the greater of the conservative 'CPI' inflation estimate, overall annual earnings growth or 2.5%. The previous system linked pensions to the greater of the higher, more realistic 'RPI' inflation estimate or 2.5%.

Even so, there is talk of the triple lock being unsustainable. This is grossly premature, based as it is on just one year of a slightly higher raise. Critics have yet to put forward a credible alternative that would enable pensioners' largely meagre incomes to keep pace with the rest of the population.

Fuel poverty and excessive winter deaths among Britain's elderly are a national scandal. The winter fuel allowance is a vital part of tackling this problem. Progressive taxation could recoup the allowance from those who do not need it, rather than unfair and divisive 'means testing'.

The media, think tanks and some politicians want to create a phoney war between the generations. The real unfairness and inequality in society is between the super-rich elite and the rest.

Big business attacks on the basic (and limited) rights of current and soon-to-be pensioners will affect younger generations even more when they reach pension age.

Instead of creating division between young and old, socialists aim to improve the income, health and welfare of all generations. The National Pensioners Convention, by fighting for proper treatment of its members, is preserving these rights for those pensioners yet to come.