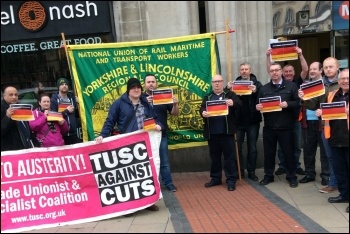 The RMT transport workers' union national conference is taking place in the immediate aftermath of the EU referendum and amid the developing coup by the right wing of the Labour Party against Jeremy Corbyn.

Delegates welcomed the vote to leave the European Union - the RMT has always opposed the EU and its directives promoting privatisation and attacking workers' rights. Opening, Sean Hoyle, president of the RMT and formerly a Trade Unionist and Socialist Coalition (TUSC) candidate, welcomed the vote but condemned the xenophobic and racist campaign in the media and by the official Leave campaign. "We are an international union and we support the rights of migrants and refugees" he said. "We supported Brexit as the fight to defend workers' rights but our voice was drowned out in the media and Vote Leave".

He also pointed to the huge opportunity now that the Tories were split and the opportunity to get a left Labour government but instead the right wing were attempting a coup against Corbyn and to install "the same old right wingers, the same old Blairites".

General secretary Mick Cash also condemned the Blairite coup that followed the referendum: "The one moment that we wanted a strong and united movement to have a go at Ukip and the Tories is now. One thing that the referendum showed is people are sick of the political class and yet the Blairites are at it again."

Outside many delegates were clear that it is even more important the union retain its support for TUSC now that the Blairites are attempting to remove Corbyn as leader.

Over 40 attended the TUSC fringe meeting on 28 June, the highest ever at any RMT conference. There was a very positive mood towards TUSC at the meeting which was addressed by RMT executive member John Reid and TUSC chair, Dave Nellist. Delegates made the point that the best way to support Jeremy Corbyn was to ensure that the right-wing Blairites were opposed in elections and also that there is a very real prospect of a new party of the working class arising out of the Blairites attempt for a coup.