University of Sheffield UCU lecturers were on strike on 23 June as part of the union's national campaign for a 'Fair Deal for Higher Education'. Strikers ran an alternative open day, with soap box speakers, explaining to prospective students and their parents how university lecturers had suffered the biggest fall in salary of any public sector workers since World War Two. UCU communications officer Sam Marsh contrasted the £14,323 a year salary of the lowest paid university worker, and his own £32,065 a year salary as an experienced lecturer, with that of the university vice-chancellor Sir Keith Burnett on £385,000 a year! The aims of the ongoing campaign are to close the gender pay gap (women earn 13% less than their male counterparts), end casualisation (some lecturers get only £2,500 for a three month contract) and win a decent pay rise. UCU members at Sheffield Hallam University are striking on 30 June. 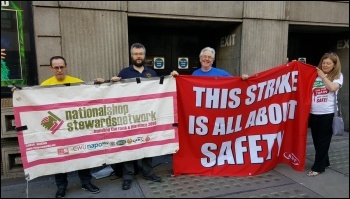 Southern Govia Thameslink Railway (GTR) conductors were picketing again against driver-only trains on 21 June, outside Barnham station. ScotRail conductors were also striking on the same issue. The GTR conductors are determined that this will not get through and are prepared to take more strike action. This is about passenger safety as well as job losses. If GTR is successful in its bid to get rid of the conductors, this will have important consequences for the rest of the network - other franchises will try to make similar cuts. Also the rail union RMT has received a leak indicating that senior civil servants at the Department of Transport are authorising train cancellations on GTR. RMT members suspect that the chaos on the GTR franchise could have been deliberately orchestrated as part of a policy to blame the staff. One recent incident involved a train driver and guard being left standing next to a train at Brighton station, along with passengers, as Southern cancelled the service claiming it was due to 'lack of staff'. The conductors are united and we must all support them. These attacks will keep happening until the railways are renationalised, putting people and their safety before profit and rebuilding a safe and well-run, affordable service for everyone. 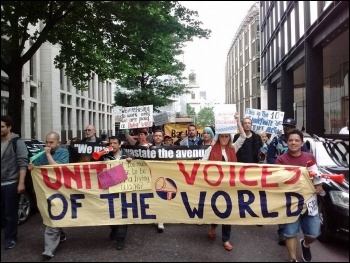 Low-paid migrant cleaners organised by the United Voices of the World trade union have been on an indefinite strike since 8 June demanding the living wage and the reinstatement of cleaners, unlawfully sacked by the anti-union cleaning contractor Thames Cleaning and Support Services Limited. Socialist Party members and the National Shop Stewards Network joined them on the protest below outside the offices the Fortune 500 commercial real estate company CBRE who manages 100 Wood Street and awarded the contract to Thames. To donate to their strike fund, bank details can be found at www.uvwunion.org.uk/volunteer/