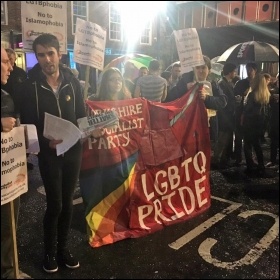 Close to 500 people gathered in Leeds city centre on 13 June around the local LGBT scene to hold a vigil for the victims of the Orlando shooting on 12 June. This was a strong show of solidarity from LGBT people and their allies from across the city and beyond, reflected in countless other vigils across the world.

Though, while the crowd gathered in remembrance, it was clear that people wanted more than a vigil and were passionate about fighting both LGBT-phobia and the Islamophobia the attack had kicked up. Socialist Party placards reading "No to LGBT-phobia, no to Islamophobia" were hugely popular, as were leaflets covering the same topic.

The Leeds vigil organisers deserve to be commended for the detail and effort put into it at such short notice and making sure the fact this shooting was a terrorist act of LGBT-phobia, which is sadly being ignored by many news outlets, was clear.

But it was a shame there was a lack of political lead from the organisers and speakers, only really touching on political action with a brief mention of the EU referendum.

Without this much-needed political context, LGBT activists in Leeds will struggle to provide direction to fight the LGBT-phobia facing the community in Leeds and across the world. This is why it is vital for gay, lesbian, bisexual, trans, non-binary and queer people to get active, not just within LGBT rights campaigns but against all attacks facing the working class to fight and beat oppression.