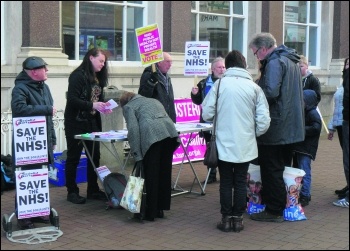 Extra stalls in the North West as part of a fortnight of action raised around £1,000 fighting fund in early June on top of regular branch activities. We sold around 50 copies of the Socialist and a number of people asked for more information about joining the Socialist Party. Some branches are doing extra campaign stalls in late June and early July which will add to these totals.

Usually we have an end of quarter week of action across the region, last time doing about 12 stalls in seven days.

The issues we are campaigning on are cuts to local NHS and public services and opposition to zero-hour contracts. In previous weeks of action, we have campaigned on nationalisation of the railways which is especially topical when fares are increased in the spring, or for renationalisation of electricity and gas to end corporate profiteering which is at the forefront of people's minds in the colder parts of the year.

All these are issues where big majorities of working-class and middle-class people are very angry at the effects of capitalism and see the need for workers' action and public ownership to tackle this.