From The Socialist newspaper, 6 July 2016 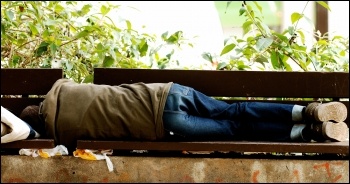 Samson Paine's body was discovered in a tent very near council offices where over 1,000 homeless applications have been received in the last year alone. Many people are asking why nothing more is being done to support some of the most vulnerable in our society, and how such tragedies can be prevented in future.

A new campaign, 'Medway Justice for Homeless People', is drawing together many who are angry and want change. At a meeting called by local activist Guy Jordan there was unanimous support for an enquiry into Samson's death - but also recognition that this single tragedy highlights a bigger problem.

"Being homeless is a situation any of us could be just two steps away from," said Guy, "and cuts to local authorities have exacerbated the situation. The people we elected have got to carry the can collectively."

Guy's comments go to the heart of the problem. Over many years, Medway's Tory council has outsourced its homeless accommodation provision to private landlords and ignored its responsibilities to those most in need. Labour in opposition has been tame in holding it to account for its wilful neglect. Now the chickens are coming home to roost.

Continued austerity is literally killing people. The campaign already has the support of Medway Trade Union Council, and general union Unite's Kent 'community' branch. Reverse all cuts - for mass building of council homes. No more deaths on our streets.

Stand firm and organise against the Blairite coup

Meeting discusses how to get rid of 'blue or red' Tories

Join the Socialist Party to fight for socialist change

Why I joined: My real education started when I joined

Hundreds protest to demand votes at 16