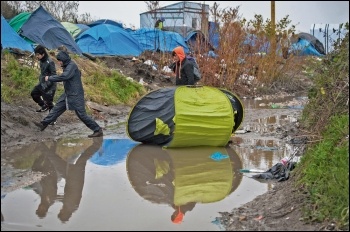 However, Abdul - who fled Darfur in 2004 in fear of ethnic cleansing - will not have to serve the sentence, because of the time he had already spent in prison awaiting trial. His sentence was based on a 19th century law - the Malicious Damage Act 1861 - which prohibits "obstructing an engine or a carriage using a railway".

The political nature of this Kafkaesque decision is obvious: to dissuade refugees from trying to come to the UK. It fits with the wider anti-refugee policy of the Tory government, which - together with its French counterpart - has been spending millions on erecting walls and fences around the tunnel's exits.

Such a strategy is not only cruel, but utterly bankrupt. People will keep trying to cross the channel, and many of them will keep dying, suffocated, electrocuted or run over by trains - just as the EU's 'deterrence' approach has only led to more boats sinking in the Mediterranean.

Granting immediate asylum to people fleeing war and persecution - including many unaccompanied children - should not be an issue in 2016 for one of the richest countries in the world.

This policy must be backed by public investment in social housing, education, healthcare and well-paid jobs for all - refugees and the local population alike. We all are victims of the same oppressive and bankrupt capitalist system.