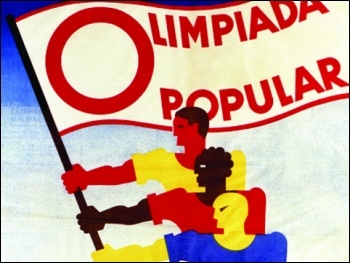 For a brief moment 80 years ago, in a hint of what Spain as a whole would become, Barcelona became the focus of opposition to fascism.

In July 1936, 6,000 athletes arrived in the city, greeted by banners and bunting welcoming them. They were no ordinary athletes; the socialist hurdlers and the anarchist shot putters were there for the Olimpiada Popular, the People's Olympiad.

The event's official flag depicted three figures in red, yellow and black clutching a single standard, the figures represented unity and equality of women and men, white and black.

This was the 'alternative' Olympics, designed to upstage the official games taking place 900 miles away in Berlin where, week's later, athletes would be greeted by 'sieg heils' and swastika flags.

Two cities, two Olympic games. One that didn't take place and one that never should. The 'people's games' and the 'Nazi games'.

It was in 1931 that the seeds were sown when Berlin beat Barcelona to host the 1936 games. But by the time the games rolled around, the world had changed.

In 1933 a parliamentary coup installed Adolf Hitler as chancellor allowing the Nazis to stamp their jackboot on German society. The Olympics then became an opportunity to flaunt this power and showcase the new Germany to the world.

Meanwhile, in 1936, a left-wing Popular Front government was elected in Spain, which decided to boycott the Berlin Olympics and host its own games in Barcelona. Athletes from 22 countries accepted the invitation with large contingents from the USA, Britain and Scandinavia.

There were also teams made up of exiles from fascist Germany and Italy and another team representing Jewish exiles. Other teams were set to represent Alsace, Basque Country and Catalonia.

The majority of the athletes knew the reason they were there. For sport but also in solidarity against fascism, as most were sent by trade unions, socialist and communist parties and other workers' organisations.

But the games would never take place. On the eve of the games the fascists and nationalists of Spain, led by Franco and assisted by Nazi Germany and Mussolini's Italy, launched a coup d'etat to overthrow the country's left-wing, republican government.

Unsurprisingly, the thousands of radical youth in Barcelona for the games supported the government but 200 of them went further and heroically pledged to stay and fight.

They recognised that this was not a domestic issue for the Spanish people but an attack by fascism. They became the first international volunteers in the Spanish civil war, including the famous swimmer Clara Thalmann, later a hero of the French Resistance, who stayed to fight in Spain. The coach of the US team Chick Chakin was also one of them and would later be killed in action.

The same conclusion was drawn by others and in the end over 2,500 men and women from Britain and Ireland voluntarily travelled to Spain to defend the elected Popular Front government of the Spanish republic against the forces of Franco, Hitler and Mussolini. The 40,000 volunteers from across the globe were an unprecedented example of international solidarity.

While in Berlin, as troops and planes were being prepared for the coming vicious war in Spain, the official Olympic Games went ahead. As well as the thousands who were to take part in Barcelona, many other individual athletes boycotted Berlin, especially Jews and the games also took place without the Soviet Union.

But many other athletes, deemed "racially inferior" by the Nazis, did compete. Fencers Halet Çambel and Suat Fetgeri Aseni, the first Turkish and Muslim women athletes to participate in the Olympics, refused to meet Adolf Hitler due to his attitude to Jews.

Most famously it was Jessie Owens, a black American, who embarrassed and infuriated Hitler and the Nazis by tremendously winning four gold medals.

The Olympic Games, like the football World Cup and other huge sporting events, are always rightly looked forward to by competitors and spectators alike. They are a chance for people to come together in a festival of sport and see inspirational acts of skill and prowess. The idea of the People's Olympiad was a marvellous attempt to protest the distortion of these ideals by the Nazis, who used the games to celebrate instead racist ideas of "racial superiority".

The modern games provide awesome moments like Mo Farah's exploits in London in 2012, Usain Bolt's speed and many more. But the games have also been used by corporations and capitalism. The brilliant 2012 games in London and around the UK, brought home to people some of the rampant money making that takes place for big business at these events, leaving little of the economic or sporting legacy promised to the working class. 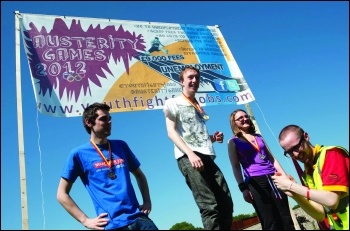 This summer, in Olympic host city Rio de Janeiro, this is starkly illustrated as some of the banners welcoming athletes and fans are ones saying: "Welcome to hell", held by police and firefighters, explaining their poor pay, or no pay at all, and saying "whoever comes to Rio will not be safe"!

Brazil is currently suffering a brutal recession and widespread corruption with Brazilian workers and poor recognising, like they did during the 2014 World Cup, that they will be paying the price of no investment in public services for a tournament they will be priced out of attending.

They will witness sporting achievement, but also the spectacle of already enormously wealthy corporations making even more out of the Rio Olympics in a city where vast inequality fuels the violence, crime and failing public services.

This is a reflection of sport under capitalism, a society as unequal as the contrasting games were 80 years ago. But the People's Olympiad is a flavour, a small glimpse of what sport and its events could be like in a society organised by the working class, a society of solidarity and equality and not one run for profit, where athletes, workers and supporters democratically run sporting bodies, clubs, facilities and events.

Caerphilly & RCT Socialist Party: What is fascism and how can we fight it?