Link to this page: https://www.socialistparty.org.uk/articles/23306 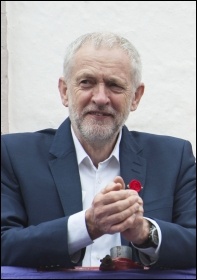 Up to 10,000 people flooded onto Liverpool's St George's Plateau and into the surrounding roads to greet Jeremy Corbyn on the Merseyside leg of his leadership tour. What a contrast with Owen Smith's event a few days earlier, where the 'crowd' was easily confused with the queue for a nearby ice-cream van!

Corbyn railed against the "Tory Britain" of poverty, homelessness, workplace exploitation, and corporate profiteering and tax-dodging. He outlined some good basic socialist policies to tackle the worst effects of capitalism in Britain today.

Instead of the "politics of the elite", by the elite for the elite, we need "the politics of the people expressing their views and aspirations", he said. Opposing new job losses at Cammell Lairds local shipyard, and the corporate scandals of BHS and Lloyds where profits go up while jobs are lost, "it should be the other way round" he said.

Corbyn contrasted deregulated, high profit-making Tory Britain with his 'Workplace 2020' initiative, including a legal obligation for companies with more than 250 workers to negotiate with recognised trade unions, an end to zero-hour contracts, full rights for agency workers, to do more for workplace rights, and unity of all workers against exploitation.

Access to justice should be universal, he said, which the cuts to legal aid have attempted to price the poor out of. There should be a public inquiry into the Orgreave police attack on striking miners in the 1980s.

Health inequalities and poor life expectancy are because of poverty and poor housing. We need to reach out and support people with mental health problems, not condemn them, and "fully fund the NHS" which is "on a conveyor belt to privatisation" under the Tories' Health and Social Care Act.

Adult social care should be properly funded so everyone is treated "irrespective of the size of their wallet".

Terrible private housing needs to change, so that "by the end of the first term of a Labour government everyone is decently and properly housed".

Local authorities should lend mortgages to first-time buyers. This kind of housing policy would create good jobs, and "if anyone thinks it's too expensive or too extreme, is anyone really too rich to think homelessness and inequality is OK?"

Education should be treated as a right for everyone, which everyone benefits from. Young people deserve a better future that allows for their hopes and aspirations to be unlocked.

We need fair investment in infrastructure around the country, not concentrated in the south east.

Labour won't go back to being the party that abstained on the Welfare Bill a year ago, said Corbyn, and to get round the shamelessly biased corporate media we will use social media and campaign in our own communities where we can all be leaders in our own communities and help the thought process about how society can be run differently.

Answering charges of utopianism, he pointed to the 540,000 Labour Party members and the 183,000 registered supporters enrolled in a few days.

Labour's annual national party conference is in Liverpool this year, and "we must make sure the conference is about a confident and strong Labour party and labour movement to sweep away the inequality and nastiness of Tory Britain".

Past gains were won through struggle, Jeremy said, and now we need a confident and hopeful movement, to change the kind of world we live in, a world of justice, hope and human rights.

The rally was chaired and also addressed by local councillors, as well as a nurse who received massive applause, a representative of the Cammell Lairds shipyard workers jailed in the 1980s during their dispute, Rhea Wolfson NEC left candidate and local MP Steve Rotherham.

The politicians who spoke praised Jeremy's personal qualities and electability, the need for unity and strength, and gained the biggest applause when they slated the Blairites, Tories and austerity, and talked of the need for socialism and Jeremy Corbyn for prime minister.

The turnout at the rally is roughly equal to Labour's entire membership across Merseyside prior to the 'chicken coup'. With a huge thirst for socialist ideas, queues formed to buy over 250 copies of the Socialist and take over 2,000 Socialist Party leaflets. Our ideas and programme for action are increasingly popular among the developing mass movement around Jeremy Corbyn.

This version of this article was first posted on the Socialist Party website on 2 August 2016 and may vary slightly from the version subsequently printed in The Socialist.