Link to this page: https://www.socialistparty.org.uk/articles/23309 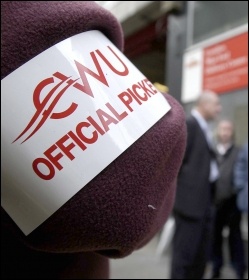 A special press conference organised by the Communication Workers Union (CWU) alongside Jeremy Corbyn himself, saw the union announce its official support for Corbyn in the Labour leadership election.

Before the press conference, a special political briefing by CWU general secretary Dave Ward on behalf of the union's executive committee was given to branch representatives, explaining the unanimous decision of the executive committee to continue support for Corbyn.

Dave highlighted the significance of motion 47 from CWU conference that was passed, which "predicted the attacks" and the need for the union to do everything it could to organise to defend Corbyn against the right-wing Blairites. Motion 47 was moved and seconded by Socialist Party members at the conference in May.

A small number of CWU branch officers in attendance, who were often the main speakers in opposition to any motions calling for an end to the union's blind support for New Labour before Jeremy Corbyn's leadership, were the only opposition to the decision.

Brian Kenny from Merseyside branch, before Dave Ward had even spoken, demanded to know why Labour leadership challenger Owen Smith hadn't been invited. Another branch officer simply reminded the meeting and Brian that the CWU is independent of the Labour Party and can do what it wants in the interests of its members!

It will be of no surprise to many to hear that Brian Kenny also happens to be a Labour councillor in Wirral.

Socialist Party members and others at the meeting raised that the immediate task is to mobilise in support of Corbyn's re-election - pointing to the many #keepcorbyn rallies and meetings that have taken place across the country. But to also consolidate the mass support for Corbyn by organising and preparing to remake Labour as a socialist, working class party that really can be a voice for the 99%.

The scaremongering threats of a Labour split that were raised by the tiny number of Smith supporters were answered simply by one Socialist Party member: ''Let the Blairites go and if they don't, mandatory re-selection is needed to kick them all out and the same with the cuts-making councillors".

The need for an overhaul in the democratic structures of the Labour Party and opening up to the workers' and socialist movement, and a return to a federal structure, was raised and received support.

Socialist Party members speaking at the meeting finished by making the case for a fighting socialist programme of renationalisation of key industries including the whole of the communications industry, workers' rights, better pay, more affordable housing and defence of the NHS, etc, to inspire and win over the mass of working class to the battle against the Blairites, Tories and austerity itself.

Jeremy Corbyn gave a passionate speech to end the meeting with a call to arms for CWU members to get involved in the fight for his re-election and change the course of the Labour Party.

We very much welcome and support Jeremy's clear call for Royal Mail to be taken back into public ownership, however it was unfortunate that when asked by the press whether he would support the renationalisation of British Telecom he said that wasn't being considered.

The Socialist Party supports the complete renationalisation of Royal Mail and BT but we would go further and call for all the main postal and telecommunications industries to be brought under genuine democratic workers' control and public ownership - to be run in the interests of society as a whole and not the profits of major private communications companies.