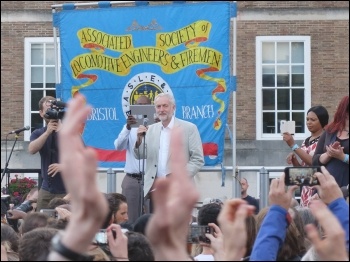 Corbyn's tour of the UK continued in Bristol on 8 August. Around 2,000 supporters of the Labour leader packed out College Green in the centre of the city. Leila Ward, a young activist, spoke passionately about the struggles faced by young people. This included attempts to block under 18s from participating in the upcoming leadership election.

Corbyn has a lot of support among young people, blocking their vote was a deliberate attempt to reduce his support at the ballot box. However, Lelia revealed to the crowd that a high court judge had overruled the blocking of 130,000 young and newly joined members from voting. This was met by cheers, which were echoed again as the news broke that all six pro-Corbyn candidates nominated for Labour NEC positions had been elected. It was certainly a good day for the Labour leader's campaign.

The Socialist Party sold over 120 copies of the Socialist and our leaflets were gone before the rally had started.